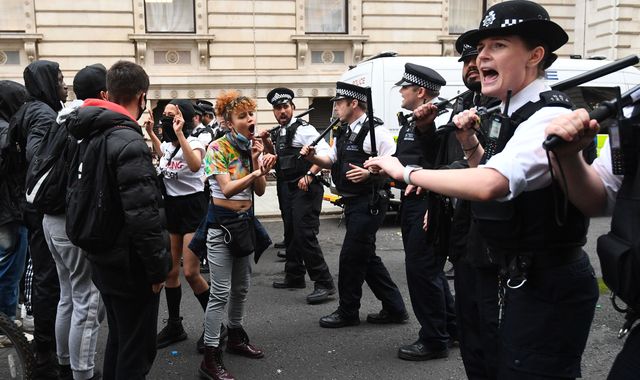 Violence and abuse against police has "detracted" from the message of the Black Lives Matter protests, London mayor Sadiq Khan has told Sky News.

Demonstrations over the killing of George Floyd have spread from America to the UK in recent days, with thousands gathering in central London on Wednesday.

That protest saw scuffles between police and demonstrators, with at least one officer being punched in clashes.

Journalists were also seen fleeing from protesters as they attempted to report on the demonstrations.

As well as urging people attending future protests to abide by social distancing rules due to the risk of spreading coronavirus, Mr Khan told Sky News there can be "no excuse" for abuse or violence against police.

"The vast, vast majority of those protesting did so peacefully, lawfully and safely," the London mayor said.

"A very small minority acted in a way that is unacceptable - they were abusive and violent towards our police officers.

"There can be no excuse for doing so.

"All they've done is, not only injure our police officers and been abusive towards them, but they've detracted from what is a really important issue: Black Lives Matter.

"George Floyd's awful brutal death is what we should be talking about and addressing the racism, the discrimination and the inequalities black people face in my city, in our country and around the world.

"It's really important nobody's under any mistaken impression that it is acceptable to be abusive or violent towards police officers or even journalists."

Mr Khan said he found it "objectionable" that "somebody would turn on a journalist or a camera person".

Mr Floyd, a 46-year-old black American, died after a white policeman knelt on his neck for nearly nine minutes in Minneapolis, Minnesota, on 25 May.

The London mayor described Mr Floyd's death as "brutal" and called for Britons not to be "not lulled into a false sense of complacency" that such an incident could only happen in America.

"In 2020, it is still the case that in the most progressive city in the world, London, that if you're born a black Londoner, your life chances and even your life expectancy are less than many other ethnic groups," Mr Khan said.

He added: "When you speak to a black person, most black people will tell you that one of the things that went through their mind when they saw the brutal killing of George Floyd is 'but for the grace of God that could have been me, my dad, my brother, my son, my cousin'."

The London mayor, who will not be attending demonstrations himself, also issued a warning to those planning to attend protests this weekend amid the continuing COVID-19 crisis.

"You may go and inadvertently - by being too close to somebody else - either pass the virus on or catch the virus," he said.

"How would you feel if you then went home and gave it to an elder relative in your home who, ultimately, lost his or her life?"

:: Listen to the All Out Politics podcast on Apple Podcasts, Google Podcasts, Spotify, Spreaker

He also called for Mr Floyd's death and the coronavirus pandemic - which has been found to disproportionately affect Black, Asian and ethnic minority (BAME) people - to be a "catalyst for meaningful change to address the structural inequalities" in London, the UK and the rest of the world.