Grenfell inquiry: Dangers of cladding used on tower known 'years' before the fire 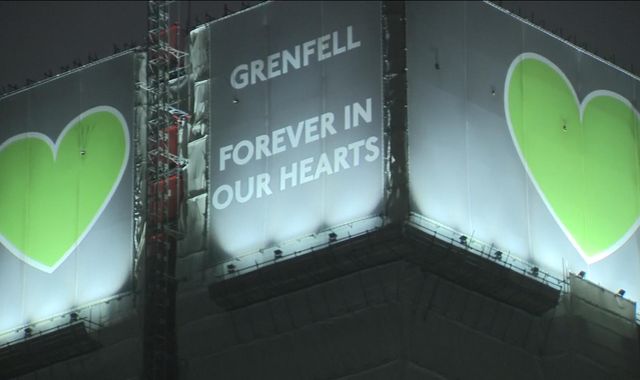 The danger posed by the combustible cladding wrapped around Grenfell Tower was known by the companies that made it years before the disaster, the inquiry into the fire has heard.

Emails which showed the risks being discussed were released on Monday as the second phase of the investigation into the disaster opened. The fire in June 2017 killed 72 people.

Celotex made most of the plastic foam insulation fitted to the tower block - and product manager Jonathan Roger told the company's marketing manager in 2013: "In the event of a fire it would burn."

In the email, sent three years before Grenfell Tower was refurbished, Mr Roger asked: "Do we take the view that our product realistically shouldn't be used behind most cladding panels because in the event of a fire it would burn?"

Elsewhere in the message, he dismissed the type of aluminium composite material (ACM) panels that were subsequently fitted to Grenfell Tower.

"A standard ACM panel... we know will melt and allow fire into the cavity," he wrote.

The inquiry was also shown an email from 2011 that was between managers at Arconic, the manufacturer of the Reynobond PE ACM panels that were fitted over the Celotex insulation on Grenfell Tower in 2016.

Discussing their fire resistance, Claude Wehrle, the company's sales and marketing director, said Reynobond PE panels were "not suitable for use on building facades".

Earlier, Richard Millett QC said most of the key figures showed "no trace of any acceptance of any responsibility for what happened".

The inquiry's first report, published in October 2019, found "compelling evidence that the external walls of the building failed to comply" with building regulations.

Mr Millett, the counsel to the inquiry, said the idea that a lack of compliance "could have happened without anyone being at fault is unlikely".

In his opening remarks as the second phase began, he said: "With the sole exception of RBKC (Royal Borough of Kensington and Chelsea) not a single core participant involved in the primary refurbishment of Grenfell Tower has felt able to make an unqualified submission against their own interests.

"With that solitary exception Mr Chairman, one finds in those detailed and carefully crafted statements no trace of any acceptance of any responsibility for what happened at Grenfell Tower."

Mr Millett added: "All core participants who played a material part in Grenfell Tower have laid out a detailed case that it relied on others and how in no way was the work it did either substandard or non-compliant (with building regulations).

"In every case, what happened was, as each of them would have it, someone else's fault."

Phase one of the inquiry, which began three months after the fire, cost more than £40m.

The second phase is being held in a new location in Paddington - and the hearings, involving 200,000 documents, could take place for 18 months or more.

The sensibilities underlying an inquiry into a disaster that killed 72 people have been laid bare by a row over the appointment and resignation of panel member Benita Mehra.

She resigned after it was revealed she was president of the Women's Engineering Society when it received a grant from the charitable arm of Arconic, which manufactured the cladding panels on Grenfell Tower.

Michael Mansfield QC, representing some of the survivors, bereaved and relatives, told the inquiry they were "concerned and anxious" over what he called "a stunning silence" from the government over if and when Ms Mehra will be replaced.