How COVID changed the UK: Daily podcast looks ahead to a new world order 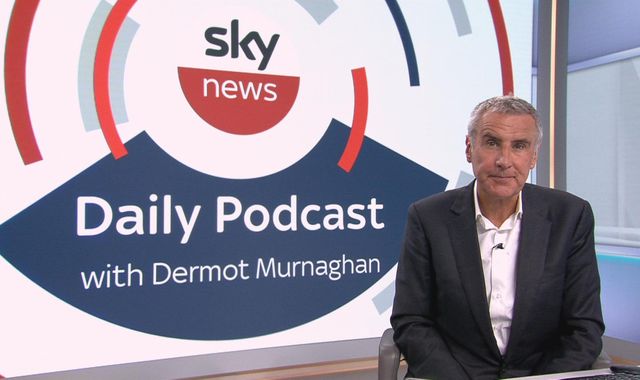 A second wave, a no-deal Brexit and a "new Cold War". In the second episode of a two-part special of the Daily podcast, Sky News looks at what could lie ahead for the UK over the next 12 months.

During the coronavirus pandemic, the UK is still trying to navigate leaving the EU, while facing tensions with China over Hong Kong and attempting get a US trade deal.

In the meantime, every country in the world is racing to find an effective vaccine or treatment for COVID-19.

But each of the challenges Britain faces point to a more divided world, technology correspondent Rowland Manthorpe tells the Daily podcast.

He said: "We are moving into a world of two blocs, where every country and every company may be forced to choose between the US and China.

"We're even seeing it with social media apps. India has banned TikTok and apparently the UK is considering the same thing, so is the US.

China's controversial security bill and how it has affected international relations poses a challenge to the US as the leading global superpower, economics editor Ed Conway added.

And "every time" a similar threat has cropped up in the past, it has brought fears of war, he says.

Conway told the podcast: "This is the crisis of a generation, the end of the post-war era.

"We can see it in our attitudes to immigration, asylum, the World Health Organisation, how companies are managed.

"Every single time we have had those set of ingredients before, it has ended badly and that terrifies me."

Conway compared it to the fallout of the Spanish flu in 1918, adding: "That wasn't a particularly happy period. That was a period when the world wasn't getting on very well. We had trade wars, borders were being erected everywhere, economic uncertainty, which built into economic crisis.

"All the ingredients are there, it scares the living hell out of me."

And the race to treat the virus isn't likely to help ease global tensions either, according to Thomas Moore, science correspondent.

Commenting on vaccines or treatments, he said: "It's going to be a case of who can get to the front of the queue.

"It will be based on wealth - not clinical need.

"And that's dangerous because this pandemic is not over until it's over everywhere."

And all this while, according to political editor Beth Rigby, the government and Leave voters are determined to push ahead with Brexit whether they have a deal by 31 December or not.

How COVID changed the UK podcast, a two-part special of the Daily podcast, is hosted by Dermot Murnaghan with Beth Rigby, Rowland Manthorpe, Thomas Moore, Lisa Holland and Ed Conway.

The second episode is out now.