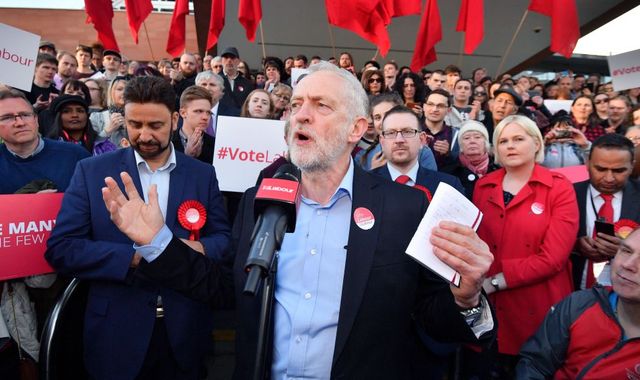 Jeremy Corbyn has been voted the "best prime minister Britain never had" - in a Twitter poll.

The former Labour leader, who led the party to its worst general election defeat since the 1930s back in December, triumphed in the online vote.

Supporters of Mr Corbyn, MP for Islington North, piled in to give him the lead over former Liberal Democrat leader Charles Kennedy in the final vote, with 57.7%.

But the unscientific poll results show an exact opposite outcome to a recent survey by official polling company YouGov, which put Mr Corbyn bottom of the list - with a net score of -53%.

Mr Smith was top with a net score of 11%, closely followed by Labour's Nye Bevan, architect of the NHS, on 8%.

Writing in The Times Red Box email briefing ahead of the final, Chorley said: "It is a title few really want. Actually being the prime minister, even a bad one, is surely better than never quite making it.

"But plenty of people have been dubbed the 'best PM we never had' over the years. So as it is a bank holiday weekend, I decided to put the idea to the test to see if we could agree on a single name. As if."

Mr Corbyn upset the odds in 2015 to become Labour leader, easily beating more established names in a result that took Westminster by surprise.

Membership numbers soared under his leadership, but many Labour MPs were unhappy with his stewardship of the party.

More than 170 MPs backed a no-confidence vote in Mr Corbyn in 2016, but their attempts to get rid of him backfired as he won the ensuing leadership challenge with more votes than the year before.

Labour then lost the snap election called by Theresa May in 2017.

But a better-than-expected showing under Mr Corbyn - which saw then-PM Mrs May lose her Commons majority as Labour gained 30 seats - saw him continue as leader.

But he announced his intention to step down on election night in December as the scale of Labour's defeat to the Conservatives - by then under the leadership of Boris Johnson - became clear.

Mr Corbyn has since returned to the backbenches, having been succeeded as Labour leader by Sir Keir Starmer in April.

Biden urges Republican senators not to push through a Ginsburg nominee

Iran dismisses US efforts over UN sanctions as currency drops

North East England lockdown rules: What are they and how will they affect me?