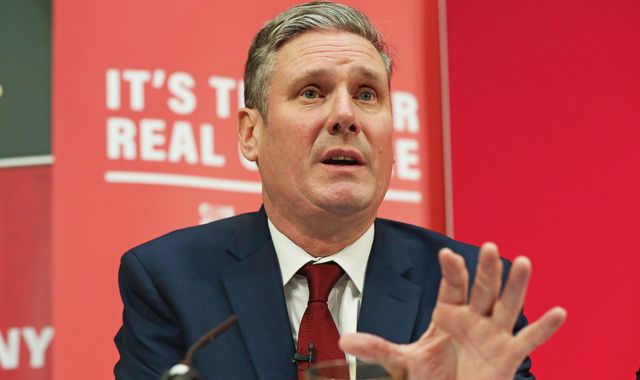 Keir Starmer has opened up a solid lead over his rivals in the race to succeed Jeremy Corbyn, according to the first poll of Labour members seen by Sky News.

The shadow Brexit secretary beats Rebecca Long-Bailey, the shadow business secretary and favourite of many of those around Mr Corbyn, with Jess Phillips in third place.

YouGov polled 1,059 Labour members for the Economic and Social Research Council's Party Members Project who they'd vote for in the last 10 days of December.

The Labour members were asked to list the likely contenders in terms of their order of preference, as they will be when they vote.

When it comes to voting, Labour runs a preferential voting system, meaning that members are asked to rank who they want in numerical order. If no one gets more than 50%, then one candidate is knocked out in each round, and the votes of the eliminated candidate are redistributed amongst the others.

Under the voting system used in this contest, the poll suggests that in the opening round Ms Nandy would be knocked out; then in round two, Ms Thornberry; then in round three, Mr Lewis; and in round four, Ms Cooper. Ms Phillips is out in round five.

This leaves a final round contest which would see Sir Keir win by 61% of the vote to Ms Long-Bailey's 39%.

Sir Keir has a 22-point lead over his rival in the final round of voting, giving him a comfortable victory if this poll was replicated on election day.

He performs strongly on third and fourth preferences, unlike Ms Long-Bailey, and beats her in every age category, every region, among men and women and among professional and working class.

The only group who favour Ms Long-Bailey over Sir Keir are Labour members who voted to leave the EU in 2016. Remainers, who form a clear majority among Labour members, back Sir Keir.

Mr Corbyn announced that he would step down after a "period of reflection" following Labour's disastrous performance at the 12 December general election - the party's worst result since 1935.

The poll, before the race has formally begun, comes at a time when some candidates may yet enter the race or pull out.

This poll doesn't include the votes of affiliates - members of socialist societies and trade unions linked to the Labour Party - or of registered supporters; people who pay a reduced fee to sign up but don't get full membership who since 2015 have also been allowed to take part.

The rules for who can take part this time have not been agreed.

The poll was commissioned from YouGov by the Party Members Project, which is funded by the Economic and Social Research Council and run by Professor Tim Bale of Queen Mary University of London and Professor Paul Webb of the University of Sussex, co-authors, with Monica Poletti, of the recently published book, Footsoldiers: Political Party Membership in the 21st Century.

Professor Bale said: "It looks as if Labour's overwhelmingly pro-European membership really appreciated Starmer's dogged determination not to flounce out of the shadow cabinet but to hang on in there in order to drag Jeremy Corbyn towards a more pro-Remain (or at least pro-referendum) position."

He added that despite figures such as John McDonnell, currently shadow chancellor, urging the party to pick a woman to succeed Mr Corbyn, this is not being heeded by the party members.

"It certainly doesn't look as if Labour's members are necessarily persuaded that it's time the party had a female leader. They seem more interested in picking the best person for the job, irrespective of gender," he added.

Meanwhile northern contenders do not get any advantage.

"For all the talk of Labour needing some 'northern grit' in order to help it regain its so-called 'northern wall' seats and working class voters, it looks like the membership are more interested in who they think will do the best job than where or what background they come from," said Prof Bale.