'Like cancelling Christmas' - Hancock criticised for lockdown announcement before Eid 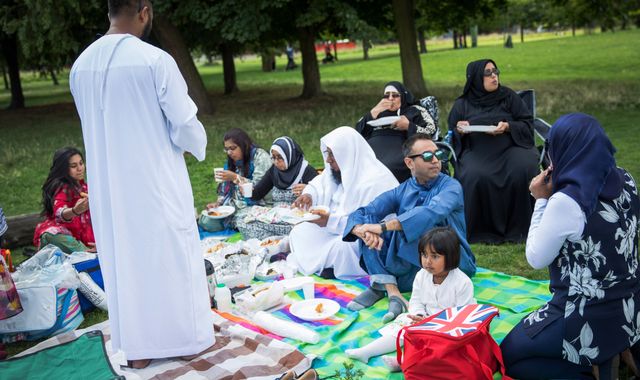 Matt Hancock's late-night announcement reinforcing lockdown in parts of northern England has been criticised for the impact on the UK's Muslim community - and likened to "cancelling Christmas".

The Health Secretary tweeted the news at 9.16pm on Thursday and quickly faced accusations that the "last-minute" action is aimed at curtailing Eid celebrations.

The measures were introduced hastily at the start of the annual Eid al-Adha "feast of sacrifice", with people in the areas affected told not to socialise with other households at home or in gardens.

Following Mr Hancock's announcement, "Christmas Eve" began trending on Twitter as social media users talked about the impact on Muslim families and questioned whether the government would have made the same announcement the night before Christmas.

One Twitter user, Rachel Palmer, tweeted: "Can you imagine this being announced on Christmas Eve, without a mention of the repercussions for Christians?

"You're either racist, you don't care or you're completely detached from the nation you're supposed to be working for. More than 2.5 million Muslims in England!!!"

Twitter user Alex Tiffin added: "If people were told at 10pm on Christmas Eve, via Twitter, that you could not see anyone not in your household, there would be outrage and likely people openly ignoring the rules. But, because it's happened on #EidAlAdha, Muslims are told to stop complaining and shut up."

Harun Khan, secretary general of the British Muslim Council, told Sky News that the government's lack of communication is "eroding trust" within communities across the UK.

He said: "With the first day of Eid being today, for Muslims in the affected areas, it is like being told they cannot visit family and friends for Christmas on Christmas Eve itself. Whilst the safety of communities is of paramount importance, as has remained the case from the very outset of this crisis, so is effective communication delivered in a timely fashion.

"Failure to communicate makes it difficult for communities across the country to continue working together to minimise the spread of the virus, whilst eroding trust in the ability of authorities to steer our course as we tackle the COVID-19 crisis.

"The UK government has failed to provide clarity on the shockingly short notice and the reasoning behind the new rules that British Muslims deserve - any such clarification would be most welcome."

The way in which Mr Hancock made the announcement was also condemned by politicians and activists, with Sir Keir Starmer leading the criticism.

The Labour leader said: "No one would argue with putting in place local action to reduce the transmission of coronavirus.

"But announcing measures affecting potentially millions of people late at night on Twitter is a new low for the government's communications during this crisis."

Saima Afzal, a community inclusion activist and Blackburn councillor, said the government "left it too late" to impose the restrictions.

"The lack of clarity for every community, not just Muslims, it's so last minute. It's going to be hard, with any celebration where people are coming together and sharing food, we will miss our loved ones more."

Meanwhile, Scotland's Justice Minister Humza Yousaf tweeted: "I feel for everyone in the North of England affected by some lockdown measures re-imposed, particularly the Muslim community who are celebrating Eid today. Many would have been looking forward to seeing family."

While acknowledging that the government was right to take action, Greater Manchester Mayor Andy Burnham told Sky News that ministers "have a habit of saying something and then it being a few hours until the detail emerges".

He continued: "And that certainly was the case last night, and later on last night a lot of people I think felt very uncertain about what exactly was being announced".

Mr Hancock has since denied that the new restriction in parts of northern England was to stifle Eid celebrations.

He told Sky News the new restrictions were "absolutely necessary", adding: "When you face a pandemic like this, it is important to move quickly if that's what needed."

He also said his "heart goes out" to the Muslim community ahead of Eid celebrations, which will be heavily impacted by the new restrictions.

He added: "We're constantly vigilant and we've been looking at the data, and unfortunately we've seen across parts of northern England an increase in the number of cases of coronavirus."

Many Muslims celebrate Eid al-Adha, which can last between two to four days, by sacrificing an animal for feasts to be shared by family, friends and those in need in large groups.

The new rules, which came into effect from midnight, ban people in Greater Manchester, parts of east Lancashire and West Yorkshire from meeting each other inside their homes or in gardens following a spike in virus cases.