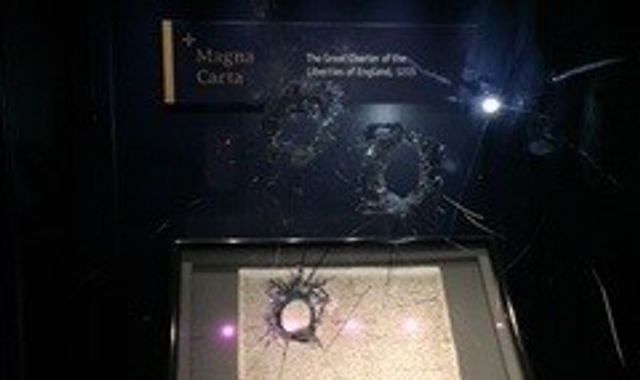 A man attempted to steal the Magna Carta from Salisbury Cathedral because he had doubts about its authenticity, a court has heard.

Mark Royden, 47, from Kent, is accused of using a hammer to smash the protective case before trying to steal the 800-year-old document from the cathedral last October.

Prosecutor Rob Welling told Salisbury Crown Court that it was the actions of "good-spirited" members of the public that prevented the robbery and his escape.

He said the defendant - who denies all charges - failed to steal the Magna Carta for two reasons: the historic document was "just too tough" for the tool he brought, and he did not bank on visitors and members of staff being willing to intervene.

"He was caught and detained despite trying to get away," Mr Welling said.

He added that members of the public, including American visitors and a member of staff, attempted to contain Royden within a set of glass doors but he threatened them with a hammer.

Cathedral outreach worker Leigh Chalmers told the court how she and others struggled with Royden and the glass door before pursuing him out of the cathedral.

She said: "The Americans were shouting 'He's trying to steal the Magna Carta, stop him.' I was saying 'Please, please stop him.'"

She added: "I was being brave, not stupid."

Ms Chalmers said Royden ran off through a goods yard before he was chased and caught by stonemasons working at the cathedral.

The court heard he told the workers: "Your security's s***."

Mr Welling said that Royden, who was described as smelling of alcohol, made comments that he should "get a medal for what he had done" and "he could have done more damage if he had a samurai sword".

He also said that Royden made an "odd prepared statement" to police and added: "It appears he is doubting the authenticity of the Magna Carta."

His comments included: "You can't talk to me about the holy grail so to speak, if you find a bag on the floor which says cocaine on it, you would have to test that bag forensically. As for your holy grail, you would need a carbon test and a trace element test."

Mr Welling said Royden planned the attempted theft having scoped out CCTV cameras and a fire alarm to set off as a distraction.

He also brought along yellow gloves, safety goggles and the hammer and was wearing a hooded top and baseball cap.

Royden was recorded adjusting a CCTV camera in a bid to prevent the incident from being captured, Mr Welling added.

Royden denies a charge of attempted theft and a second count of criminal damage to the security case costing £14,466.