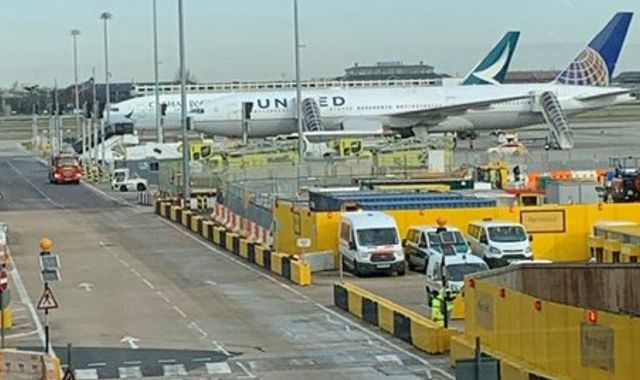 A passenger with suspected coronavirus was on board a flight from San Francisco which landed at Heathrow this morning.

Other passengers on United Airlines Flight 901 have told Sky News the captain told them to stay in their seats after landing because someone had been "taken ill".

Andy West, from Henley-on-Thames, said he knew something was happening when he saw a fire engine had met the plane, which was not allowed to park at the terminal.

He said staff then informed passengers that the individual had suspected coronavirus, or COVID-19, and they would need to wait for officials to board the plane.

The passenger was taken to the back of the plane but Mr West said the cabin crew were not wearing any protective clothing, including face masks.

He said everyone was told to fill in a Health England contact form and then after 20-25 minutes they were allowed to disembark.

He added that he was "a bit surprised" they had been allowed to go. Sky News spoke to him as he waited for his luggage in the baggage hall in the terminal.

He said they did not receive any advice about what to do and that he was not planning to self-isolate but would take every precaution if he suspected he had any symptoms.

Twitter user Neeraj Malhotra tweeted: "Just landed @heathrow T2 and captain has announced that someone on the plane has suspected #coronavirus. noone allowed to leave the plane! waiting for doctor confirmation expected either way. person isolated at the back of the plane. (fingers crossed emoji) false alarm!"

Mr West said the captain had told them seven other planes at Heathrow also had suspected cases of coronavirus on board.

A statement from United Airlines said: "Our team at London Heathrow Airport is providing assistance related to United flight 901 (San Francisco-London Heathrow) today, following reports of an individual becoming unwell on board.

"The safety of our customers and employees is our highest priority and we continue to work closely with local authorities."

There are now a total of 64,441 suspected and confirmed cases of COVID-19 worldwide.

Coronavirus pandemic: 'It's not a question of if, but when'