Premier League: Support for Black Lives Matter is 'not political' 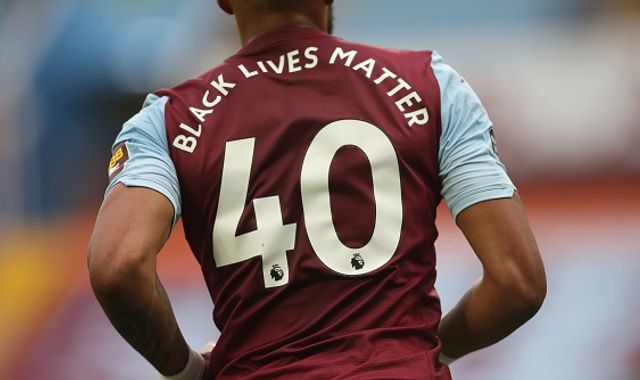 The Premier League has said its Black Lives Matter campaign does not endorse any organisation or movement with a political agenda.

The UK branch of Black Lives Matter has been cause for some concern after it posted on social media about defunding the police, calling for the dismantling of capitalism and issues regarding Israel and Palestine.

In a statement, the league reaffirmed its commitment to its anti-racism campaign, although it was "aware of the risk posed by groups that seek to hijack popular causes and campaigns".

It said such actions are "entirely unwelcome and are rejected by the Premier League".

Some players have begun distancing themselves from BLM UK, with former Stoke City midfielder Karl Henry saying that there needs to be a "politically neutral anti-racism movement".

"I think the majority of the UK have now had enough of that organisation," he tweeted.

After BLM UK posted a series of tweets over the weekend, Labour leader Sir Keir Starmer told BBC Breakfast it was a "shame" the sentiment behind the UK movement was "getting tangled up with these organisational issues".

He added that it was "nonsense" for the group to call to "defund the police".

In response to his comments, BLM UK tweeted that Sir Keir "was a cop in an expensive suit".

BLM UK has also been accused of antisemitism after airing its support for Palestinians on Twitter.

One tweet read: "As Israel moves forward with the annexation of the West Bank, and mainstream British politics is gagged of the right to critique Zionism, and Israel's settler colonial pursuits, we loudly and clearly stand beside our Palestinian comrades."

The UK's Board of Deputies swiftly responded to the tweets and claimed the far left and far right were trying to "divide black and Jewish communities".

Marie van der Zyl, president of the board, said in a statement: "It is beyond disappointing that the Black Lives Matter UK, supposedly an anti-racist organisation has leaned into the antisemitic trope that British politics is 'gagged' in terms of debating Israel, a claim particularly preposterous because Israel is one of the most-discussed foreign policy issues in this country."

The Premier League's statement was released after its chief executive Richard Masters was grilled by British MPs at a hearing on Tuesday about its support for the BLM movement.

Mr Masters defended players and clubs for wearing "Black Lives Matter" on their shirts and described the cause as a moral one at the hearing of the Digital, Culture, Media & Sport (DCMS) Committee on Tuesday.

When the league restarted earlier this month after a three-month stoppage due to the COVID-19 crisis, players from all 20 clubs replaced their names with "Black Lives Matter" on the back of their shirts.

All 22 players and the referee "took a knee" in support of the movement at the first Premier League match at Villa Park.