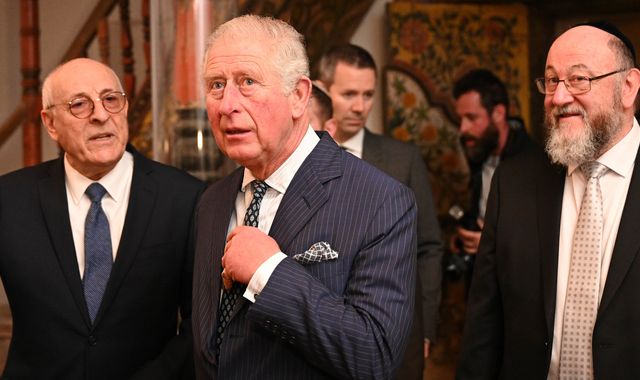 Prince Charles has warned language all too often turns "disagreement into dehumanisation" on the 75th anniversary of the liberation of Auschwitz-Birkenau.

However, Polish President Andrzej Duda refused to attend, complaining he had not been allowed to deliver an address, whereas Mr Putin and other leaders were given speeches.

US President Donald Trump returned home following his trip this week to the World Economic Forum at Davos in Switzerland.

On Friday he will become the first US president to attend the annual anti-abortion March for Life gathering in Washington DC.

In his speech at the event to commemorate Allied Forces entering the Auschwitz concentration camp in January 1945, Prince Charles said the "lessons of the Holocaust are searingly relevant to this day".

"All too often, language is used which turns disagreement into dehumanisation.

"Words are used as badges of shame to mark others as enemies, to brand those who are different as somehow deviant.

"All too often, virtue seems to be sought through verbal violence.

"All too often, real violence ensues, and acts of unspeakable cruelty are still perpetrated around the world against people for reasons of their religion, their race or their beliefs.

"Knowing, as we do, the darkness to which such behaviour leads, we must be vigilant in discerning these ever-changing threats; we must be fearless in confronting falsehoods and resolute in resisting words and acts of violence."

Earlier in the day, on his first official tour to Israel, Prince Charles met Israeli President Reuven Rivlin ahead of the Yad Vashem event.

Prince Charles held talks with Mr Rivlin at his official residence in Jerusalem ahead of the commemoration event.

Israel's president told the royal he "deeply appreciates" his attendance at the World Holocaust Forum gathering, which is also aimed at fighting racism and fascism today.

Mr Rivlin said: "It starts with the Jewish people but we never know where it ends. Everyone needs to be very careful."

He also told Prince Charles "we still expect your mother to come", as the Queen's eldest son began his first official tour of Israel.

It is the highest-level royal visit since the creation of the state of Israel.

Prince William was the first royal to make an official visit when he made a trip to Israel and Palestinian territories in 2018.

The Queen has never made an official visit to Israel or the Palestinian territories.

Prince Charles previously travelled to Jerusalem to attend the funerals of President Shimon Peres in 2016 and Prime Minister Yitzhak Rabin in 1995, but these were classed as personal visits.

During the rest of his trip, Prince Charles will sit down for talks with Palestinian President Mahmoud Abbas and is also likely to visit the resting place of his paternal grandmother in Jerusalem's Church of St Mary Magdalene.

Princess Alice of Battenberg was honoured by the Jewish people for saving the lives of Jews in Nazi-occupied Athens during the Second World War.