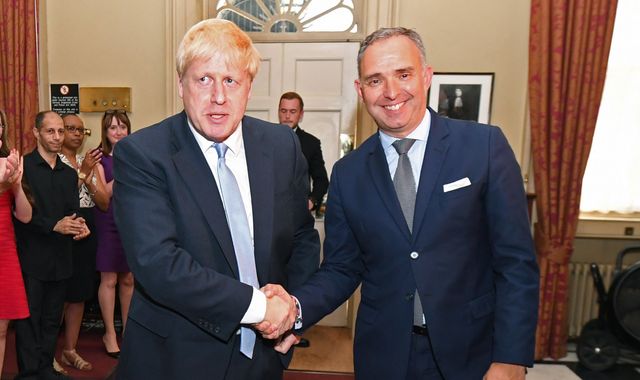 The UK's top civil servant has warned that fellow Whitehall officials are now "fair game" as he prepares to leave his role.

Sir Mark Sedwill, who is due to step down as cabinet secretary and head of the civil service in September, said that hostile briefings against those working in the civil service had become a "regrettable feature of modern politics".

His comments come after a job advert for his replacement in the £200,000-a-year role was posted this week.

It was revealed on Wednesday that the prime minister last month personally approved a £248,000 pay-off for Sir Mark.

The announcement of Sir Mark's impending departure as the UK's most senior civil servant - a position he will have held for less than two years - followed reports of clashes between himself, Mr Johnson and the prime minister's chief adviser Dominic Cummings.

Criticism of Sir Mark's handling of the coronavirus crisis also appeared in the press, with former civil service chief Lord Kerslake having since accused Mr Johnson of trying to make Sir Mark the "fall guy" for government failures.

Appearing before parliament's National Security Strategy committee on Wednesday, Sir Mark was asked why he resigned from his dual post.

He replied: "I haven't resigned. The prime minister and I agreed I should step down, by agreement.

"That was essentially because we had concluded it was time to split the jobs again - and have a separate security adviser and separate cabinet secretary."

Sir Mark told MPs and peers on the committee that "personalities were not an issue at all" during his time working in Downing Street.

"At some point between the election and the middle part of this parliament, it would have been sensible for me to have moved on," he added.

Mr Johnson's spell as prime minister has seen a number of changes at the higher levels of the civil service.

In February, Sir Philip Rutnam, the most senior civil servant at the Home Office, quit following what he described as a "vicious and orchestrated" campaign against him.

Last month, Mr Johnson asked Sir Simon McDonald to quit as the Foreign Office's most senior civil servant ahead of the department's merger with the Department for International Development.

It followed reports of friction between Sir Simon and the prime minister.

Sir Mark warned his successors in his two roles that they "will have to deal with" briefings against them in the media.

"It is never pleasant to find oneself, particularly as an official, in the midst of stories of that kind," he said.

"We appear to be in an era where some of us are fair game in the media and I'm afraid it goes with the territory now.

"I guess my successors will have to deal with some of that as well.

"I don't think it is ever pleasant in government, whether it is against ministers, between them and particularly against officials, when you have briefings to which you cannot really reply, particularly those that are off the record and sniping away.

"But it is a regrettable feature of modern politics, I'm afraid."

She branded Mr Frost a "political appointee with no proven expertise in national security".