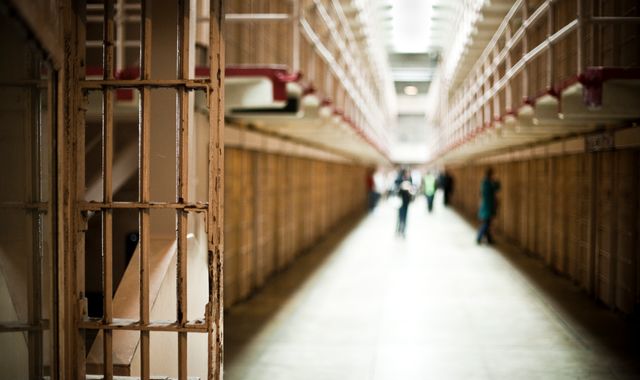 Up to six people die behind bars every week, according to campaigners who have branded the findings as a "national scandal".

The charity INQUEST, which supports families through coroners hearings, said its analysis of official statistics shows "dangerous, long-standing failures" in the prison system, adding there are "historically high levels of deaths in custody".

Referring to figures from the Ministry of Justice, it says 166 prisoners self-harmed every day, and 308 people died behind bars in the 12 months to September 2019 - around six a week.

Of those, INQUEST says that 158 died from "natural causes" and 90 were "self-inflicted" deaths - the equivalent of a prisoner taking their own life every four days.

The group analysed 61 inquests into prison deaths in England and Wales in 2018 and 2019, and claimed that there were "repeated" failures in safety with mental and physical healthcare, emergency responses, communication and drugs and medication.

Figures also showed a rise in naturally occurring deaths, which INQUEST says were linked to "serious failures in healthcare", adding that a "lack of government action on official recommendations is leading to preventable deaths."

Speaking about the findings, INQUEST's director Deborah Coles said: "This report exposes indefensible levels of neglect and despair in prison.

"Officials and ministers repeat the empty words that 'lessons will be learned'.

"Yet the recommendations of coroners, the prison ombudsman and inspectorate are being systematically ignored. This is a national scandal."

She added: "In the long term, protecting both prisoners and the public from more harm will require investment in our communities, not ineffective punitive policies."

Ms Coles also said that while prisons "automatically receive millions in public funding", families are facing a "struggle for truth, justice and change".

Responding to the report, prisons minister Lucy Frazer QC MP said: "One of the most difficult things to hear in my role is that another person has taken their own life while in prison and I can't begin to imagine how families must feel when they get the news.

"Far too many prisoners are self-harming and it's one of the reasons we introduced the key worker scheme in 2018, supported by the recruitment of 4,400 extra prison officers, so that every offender can get dedicated support and have someone to talk to.

"We've also given over 25,000 staff better training to spot and prevent self-harm and are investing an extra £2.75 billion to modernise prisons, combat drug use and improve the environment in which offenders live.

"We never completely know what drives someone to suicide but I am determined that the Prison Service does everything it can to avoid contributing to that pressure."

The Ministry of Justice added that it is spending £100m on security to prevent drugs and weapons entering prisons, and it has rolled out training for new and existing staff that focuses on suicide and self-harm prevention.

It also claims that prison staffing levels are the highest they have ever been.