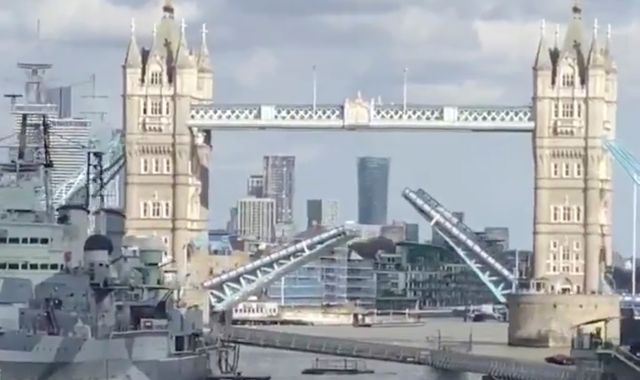 Tower Bridge became stuck in the open position for more than an hour due to a "mechanical fault", causing traffic gridlock in central London.

The famous bridge failed to close after opening to allow a ship to pass through along the River Thames on Saturday afternoon.

Pictures showed the two arms of the bridge at different angles, with witnesses saying they had failed to come down at the same time, the Evening Standard said.

Traffic, pedestrians and cyclists waited for at least an hour from both directions.

Another commented: "Yep, tower bridge definitely stuck! One side started to come down but the other didn't!"

A witness told the PA news agency: "According to the security radios we overheard there are multiple failures."

Engineers rushed to fix the bridge as motorists were urged to find other routes, City of London Police said.

The force said on Twitter: "Tower Bridge is currently closed to pedestrians and traffic, due to a mechanical fault."

It later said the bridge was open to pedestrians, but still closed to traffic.

The bridge, which connects the Square Mile financial district to Southwark, was closed for 10 hours by police in 2005 after a technical problem meant the arms could not be lowered.

A London Bridge spokesman has been approached to comment.