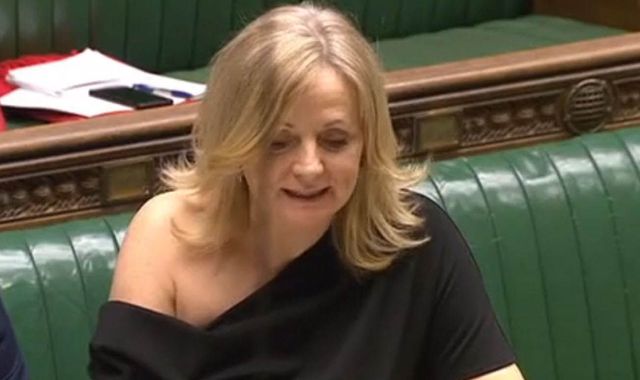 An MP who was criticised on social media when a dress slipped off her shoulder in parliament says she is "humbled" after the garment raised more than £20,000 for Girlguiding UK.

Labour frontbencher Tracy Brabin tweeted that "young girls' lives will be changed because of this money".

Girlguiding said it would "help us build the confidence of girls today to be the leaders of tomorrow".

The black dress - which Ms Brabin bought on ASOS for £35 - slipped as she leaned on the despatch box in the Commons because of a broken ankle.

When someone on Twitter asked if the garment was "really appropriate attire for parliament", respondents said she looked "drunk", "classless" and like a "slapper".

In reply, the former Coronation Street actress said she was not a "slag, hungover, a tart (or) about to breastfeed".

The 58-year-old shadow culture secretary said she put the dress on eBay as a way of standing up for women in the workplace.

"I thought I would maybe get £500 for it, which would have been amazing," she said.

"I do not think in three years being an MP anything has made quite as much an impact like this."

Following the auction, Ms Brabin said she would be attending a meeting of the 1st Roberttown and Norristhorpe Guides in her constituency of Batley and Spen in West Yorkshire.

She said: "It's extremely humbling to be able to do this for Girlguiding and I am looking forward to attending a meeting tonight and celebrating with the girls.

"I want to encourage them to really be proud of who they are, to support each other as girls and to not take any criticism from anyone - particularly boys - as I have found in my experiences with Twitter."

A member of Girlguiding's Advocate Panel, 15-year-old Henrietta, said "shouldergate" had shown that "female MPs are often vilified for their looks, not their actions".

She added: "This demeans girls and our aspirations to be politicians.

"But Tracy Brabin - and all the people who supported her and Girlguiding by bidding on the dress - have shown that oppression is never acceptable."