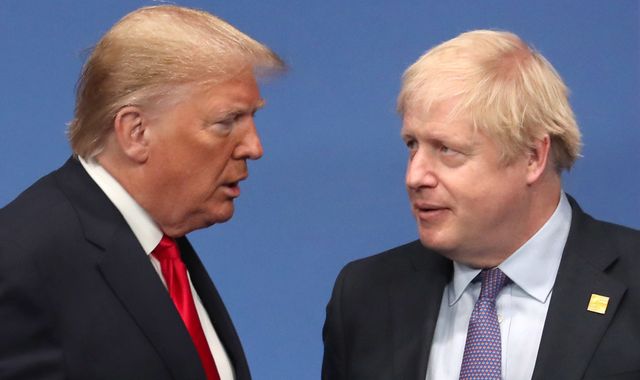 The UK and US have begun negotiations on an "ambitious" post-Brexit free trade deal.

The first round of discussions will get under way on Wednesday and continue for around two weeks.

There will be some 100 negotiators on each side taking part.

Further rounds of talks will happen every six weeks and will be conducted remotely until it is safe to travel again.

The negotiations will be led at an official level by the Department for International Trade's Oliver Griffiths and Daniel Mullaney, the assistant US trade representative for Europe and the Middle East.

Supporters of Brexit have argued the ability for Britain to strike its own free trade deals with nations around the world like the US will provide a boost to the economy.

But opponents have expressed fears that striking a deal with Washington will mean Britain having to accept looser US food and environmental standards and will not make up for losing access to the EU's customs union and single market.

They also fear it will open up the NHS to American firms, something Prime Minister Boris Johnson denied during last year's general election campaign.

Ms Truss said a trade agreement would help the UK and US economies "bounce back" following the COVID-19 pandemic.

"We want to strike an ambitious deal that opens up new opportunities for our businesses, brings in more investment and creates better jobs for people across the whole of the country," she said.

"The prime minister has been clear that we champion free trade and this deal will make it even easier to do business with our friends across the pond.

"As we sit down at the negotiating table today be assured that we will drive a hard bargain to secure a deal that benefits individuals and businesses in every region and nation of the UK."

Mr Lighthizer welcomed the beginning of talks, which he said were aimed at striking an "historic agreement".

"Under the leadership of President Trump, the United States will negotiate an ambitious and high-standard trade agreement with the UK that will strengthen our economies, support good-paying jobs and substantially improve opportunities for trade and investment between our two countries," he said.