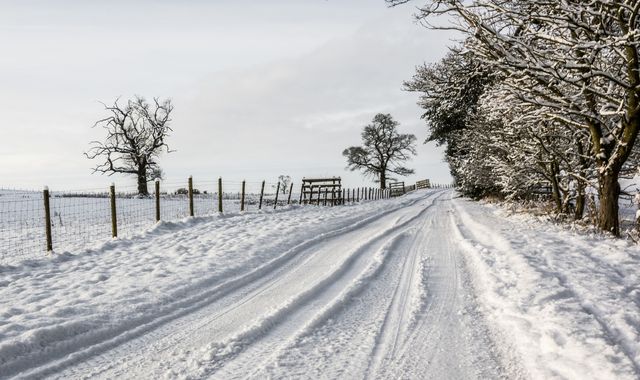 The UK could get its coldest night this winter - with potential for snow and ice causing travel disruption.

Temperatures could plummet to -8C (17.6F) in parts of Scotland overnight.

Sky News' weather team says there is a chance the chilliest parts of the country could beat this winter's lowest temperature of -10.3C (13.5F), which was recorded on New Year's Day at Scotland's Tulloch Bridge.

"Tonight could be the coldest night of winter so far," the team said.

"Temperatures are expected to drop to around -8C (17.6F) over the Highlands, so there's the risk we could drop to the lowest we've seen so far this season.

"It may still come as a shock as the weather has been surprisingly mild over the last few months.

"The UK's December temperature was 1.2C (34F) above the long-term average, and January has continued in the same warm vein."

The Met Office has issued yellow warnings for heavy snow and ice over the higher ground in northern England and southern Scotland.

Icy patches are expected to bring some disruption to roads and railways, while making pavement and paths slippery.

In northern England, the Met Office said snow and ice could cause travel delays, potentially stranding some vehicles and passengers.

Met Office meteorologist Simon Partridge said the potential of seeing winter's coldest night would depend on whether there were clear skies over snow for long enough.

"This leads to cold temperatures, and we'll certainly have two cold days," he said.

"Sleet and snow showers are forecast for Monday, which will bring icy patches to low ground and snow to higher ground."

He said a chilly breeze will also add to the wintry climes on Monday and Tuesday, although daytime temperatures will be near the average of around 2C (-17F) for this time of year.

The "short, sharp cold spell" is expected to pass when milder weather moves in from the west later on Tuesday.