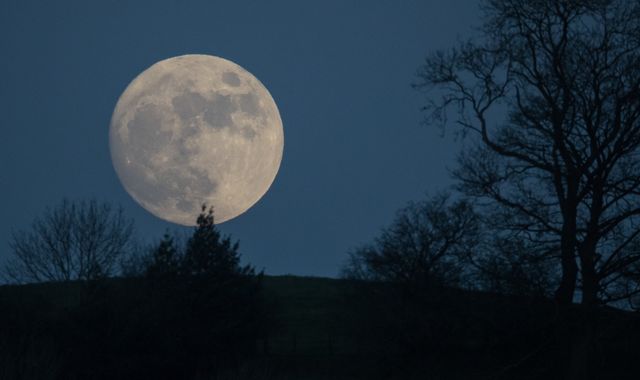 The first full moon of the decade will light up the night sky on Friday and will coincide with a lunar eclipse.

Stargazers will get a perfect view if the weather is kind, with "lovely clear skies" forecast for the South East.

There will be a penumbral lunar eclipse between 5pm and 9pm, which happens when the sun, moon and Earth are perfectly aligned.

The Earth's outer shadow - the penumbra - will fall on the moon and make it look a bit darker than normal.

Met Office spokesperson Bonnie Diamond said conditions should be excellent for the eclipse in the South East but that other parts of the country could be disappointed.

Western areas may be cloudier, while heavy rain is expected in Northern Ireland and Scotland in the late afternoon.

Ed Bloomer, an astronomer at the Royal Observatory Greenwich, explained that the first full moon of the year is sometimes called a "wolf moon".

The term is thought to have come from Native Americans - because of how wolves would howl during the winter months.

While there is a limited four-hour window for catching the eclipse, Mr Bloomer said the "wolf moon" should be easily visible throughout the night across the UK.

He said: "The first full moon of 2020 is today, and here in the UK we should be able to see it nice and clearly.

"It will be rising in the east as the sun sets in the west, and we'll be able to observe it throughout the night."

But those hoping for a triple-whammy, perhaps hoping the moon might once again turn red, will have to wait until next year.

However, there are another three penumbral eclipses to look forward to this year - and the next full moon will occur on 9 February.