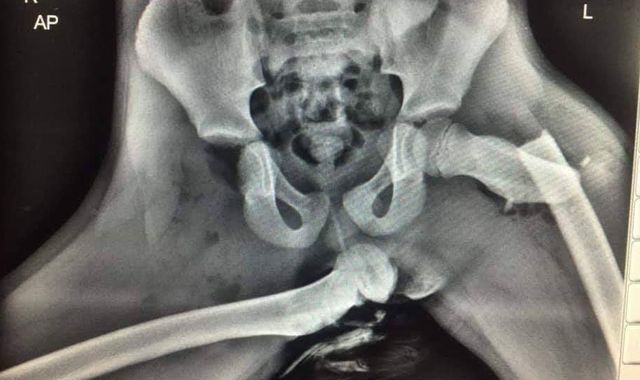 An X-ray of a crash victim who had her feet up on a car dashboard at the moment of impact has been shared by police to warn passengers to keep their legs in the footwell.

The image, released by officers in Wales, shows the woman suffered life-changing injuries, with one of her hips completely broken off and protruding out of the skin.

She also appears to have suffered several fractures in the crash, including to the femur in her right leg.

Police said the woman survived the crash, but was badly injured because of the way she was sitting in the vehicle.

Sargent Ian Price said on Twitter: "Here is an X-ray of horrific injuries sustained to the front seat passenger who had their feet on the dashboard at the time of a collision.

"If you see your passenger doing it stop driving and show them this."

Sitting with your feet on the dashboard is not illegal in the UK, but can obstruct the driver's view of the wing mirror.