Who's In The Wrong? Lorry Crushes Car After Both Simultaneously Try To Turn Left

Dashcam footage captured the moment a lorry crushed a small car, after they both attempted to turn left at a busy junction.

The footage shows a blue Toyota drive down the left hand side of the juggernaut as both vehicles approached the busy junction in Leicestershire.

The car is crushed and dragged into a busy dual carriageway, before the par come to a stop.

But who do you think is in the wrong?

Coronavirus: How to keep your husband happy in lockdown posters condemned

WATCH: The Leaked UFO Footage That The US Navy Admits Is Real 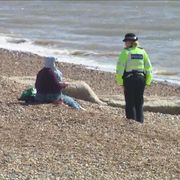 Coronavirus: How and when might the COVID-19 lockdown end?