The Duke and Duchess of Cambridge visiting Sikh women preparing food for vulnerable families, staff at a violence reduction unit and Glasgow's drug overdose response team during their visit to Scotland.

William and Kate joined a group of Sikh women preparing food for vulnerable families across Edinburgh and tried making chapatis.

The duke and duchess tossed the dough from hand to hand under the watchful eye of the group from Sikh Sanjog, and William said: "I love curry... not too spicy".

When Kate was asked if she made curry at home, she replied: "Yes, I love it."

The duke acknowledged her Indian dishes were very good, but had one reservation.

"She likes a bit of spice," he laughed, "I'm not too good with spice."

During lockdown Sikh Sanjog, established in 1989 to support women from the Sikh community integrate into wider Scottish society, provided curry meals twice a week to the disadvantaged and have carried on the service.

The couple also dished up portions of food during the cooking session held in the cafe kitchen at the Palace of Holyroodhouse.

Earlier Kate tried her hand at being a music producer only to receive a scathing review from William.

The couple were visiting the Scottish Violence Reduction Unit (SVRU) in Cockenzie, a joint project backed by the police and the Scottish government which tries to tackle the root causes of violence.

At the unit they saw young people doing martial arts, music production and bicycle maintenance, organised by Heavy Sound, a community organisation founded by a campaigner who spent 12 years of his life as a homeless addict.

Manager Thilo Pfander persuaded Kate to try her hand at making some EDM, electronic dance music, and at first the duchess received some encouragement from her husband who said: "Yeah, drop a beat in the background."

Kate did produce a bass heavy track but added a piercing synth sound over the top.

William laughed and said: "What's that?

After a few moments William pleaded for it to stop saying: "It's hurting my ears" then added: "I'm not sure it's number one material yet."

The Cambridges began their day by speaking to recovering drug addicts who have returned to the streets to help support those who have suffered near-fatal overdoses.

William and Kate were reunited in Scotland for the first time during the duke's tour of the country when they visited a leading social care charity helping to tackle issues like substance abuse and mental health, and break cycles of crime and addiction.

The couple visited Turning Point Scotland's (TPS) centre in the town of Coatbridge and heard during a video call how its ground-breaking Glasgow overdose response team (GORT) is helping to save lives.

Speaking to recovering users, William said the key turning point often comes "When somebody else (is) taking actual proper interest in your life".

He added: "Of course, so many times people come and go, don't they, when you're looking for help, and you get sent to god knows how many different organisations, and you get passed to the next one.

"But what is crucial is how you capture that big net in one go that really matters, which is what you guys do here."

One of TPS's team helped develop GORT after the death of two close friends, and he highlighted in the video call how bootlegged sedatives known as "street benzos" are a growing problem and can be 50 times more powerful then previous batches.

"People were using pill presses, that were creating all sorts of cocktails of horribleness, and people were dying as a result. There were various episodes where you see spikes in deaths."

William and Kate, who was wearing a royal blue Zara blazer and skirt by Hope, were told that under the GORT initiative frontline workers and recovering addicts were providing real-time crisis support for people who have experienced a near fatal overdose.

Funded by, and developed in partnership with, the Drug Deaths Taskforce, the service began operating in December 2020 and has quickly delivered highly promising early results, leading to a planned fast-tracked rollout of services to other regions in Scotland. 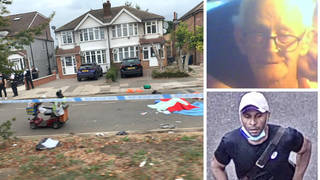