As Bad As It Gets

David Mellor writes: 'The thought of a Trump administration should fill any rational person with horror. But one man will be cheering him on: Vladimir Putin.'

Back in 1980, a US bumper sticker captured what a lot of American voters thought about the contest between a failed President, Jimmy Carter, and a former movie actor Ronald Reagan: "Shame one of them has to win."

For me, that sums up the present unpopularity contest between a loudmouthed maverick businessman, Donald Trump, and a discredited, over-the-hill Washington insider, Hilary Clinton.

President Carter was nothing like as flawed as Clinton, he was just a bit naïve. And Reagan was far more experienced than Trump, having been a successful, two-term Governor of California.

Trump is impervious to advice, and makes political statements with the same ease, and lack of intellectual effort, as most of us break wind.

Reagan ended up busting the Russians, and winning the Cold War. Reagan detested the Soviet’s “Evil Empire”. Trump’s relationship with Putin is way too close for comfort, and is apparently of interest to the FBI, though they won’t tell us what’s going on with the same alacrity as they have publicised a renewed investigation into Hilary Clinton’s emails. Why not?

Back in 1980, having been introduced to Reagan on his way to his first (and decisive) Presidential debate with Carter in Cleveland, I asked one of his closest Californian supporters what kind of President would Reagan make. She replied, “Ron will be a very fine President, because he’s not embarrassed by being surrounded by people with much better brains than he’s got himself”.

Just so, and that’s how it turned out, with many now thinking Reagan one of the greatest 20th Century Presidents.

What chance of that with Mr Trump, should he win? I asked a well-placed American friend. He replied; “Slim and none.  And Slim’s left town!”

The remarkable thing about this election is that despite Trump being revealed time and time again as a serial slob, with none of the qualities needed for the Leader of the Free World, he’s still less than 4% behind Clinton in a poll of polls this weekend.

The conclusion is obvious; people just don’t like the Clintons. They don’t trust either her, or her sleazeball husband, and they don’t want them back in the White House.

Millions of voters will put a clothes peg on their noses, and vote for her, because they like Trump even less, but this weekend seems to show they can, apparently, be easily distracted by adverse news. What this storm in a teacup over former Congressman Anthony Weiner’s emails shows, is that a puff of wind may be enough to blow Hilary away.

Let us pray it doesn’t; the thought of a Trump administration should fill any rational person with horror.

But one man will certainly be cheering him on: Vladimir Putin, the butcher of Aleppo, thinks Donald is just fine.

And with all that Russian money apparently sloshing around in Trump’s businesses, if you think Obama has been weak with Putin, just wait for Trump. 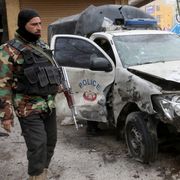 Pakistan: At least 10 killed in suicide bombing in Pakistan