Macron Won Simply By Not Being A Fascist, Says David Mellor

The election of the superficial, Blair-lite Emmanuel Macron is a sign of the weakness of France, not its strength. He is President Flimsy, says David Mellor.

Macron has precious little political experience, has never run for office before, and doesn’t have a political party to support him in power.

His so-called movement En Marche! (On the Move!), by its very title, shows the glib shallowness of a candidate with no deep seated beliefs.  And a sign of the man’s overweening vanity, since the initials of his party, are the same as his own.

Macron was elected for one simple reason – he wasn’t a fascist.   And was willing to say anything to please voters appalled at the thought of her.

When politics in France returns to normal, Macron will find himself trying to effect change in a notoriously recalcitrant country, that has resisted fundamental reform for decades.  And he will have to try to ram through a programme of change without Deputies in Parliament.  This agenda makes the impossible look easy.

He may be the youngest President since Napoleon, but there the comparison ends.  There’s something of the wuss about Macron.  There was nothing wussy about Bonaparte. 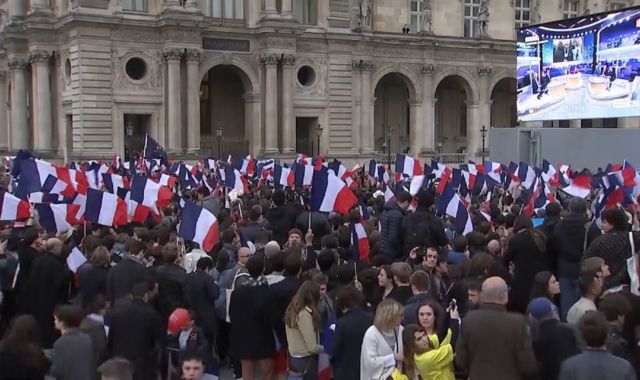 A proper analysis of the votes in the two parts of this Presidential Election shows, what a mess, politically, France is in.

Macron has no real political strength; he got less than one in four first preference votes.  And that only because the favourite from the right, and natural successor to the discredited President Hollande, Francois Fillon, imploded.  He was exposed as a serial expenses cheat, who then refused to stand down, opening the way for Macron.

Look even closer.  One in three voters – maybe 11 million in all – voted for Marine Le Pen, twice as many as voted for her holocaust–denying father 15 years ago.  An impossible result to contemplate in a mature, stable democracy like Britain.

Turnout was low.  12 million voters refused to go to the polls.  And, astonishingly, 4.2 million who did, went to the polling stations solely to spoil their ballots.  Again, an impossible figure to contemplate in a mature democracy.

A further sign of France’s inherent political instability is that a far-left candidate along Greek lines won almost 20% of the vote in the first round.  Could Paris become Athens at some point?  Don’t rule it out.

The French economy needs radical surgery, but is Macron the man to deliver it.  After all, he did nothing during his brief spell as Treasury Minister under Hollande, a President so discredited his Socialist Party’s candidate won a derisory 7% of the vote in the first ballot.

So, this is how France ended up with President Flimsy.  Nothing more positive than a bizarre combination of circumstances, most of them negative.

Macron inherits a country bitterly divided, still under a state of emergency, with an alienated immigrant underclass, frighteningly high unemployment, and a stagnant economy, reminiscent of Britain in the 70s.  We changed, they didn’t.

So, forget about the cheering.  It reminds me of an old line about jingoism in the First World War; “Today they are ringing the bells, Tomorrow they will be wringing their hands”.

Macron has two chances of sorting out France – slim and none.  And Slim’s left town.