Philip Hammond was humbled and humiliated yesterday, but he’s still in the job. Why? Because there’s no one else.

It was all typical Hammond, an over-promoted mediocrity, who in the sort on Tory government Mrs Thatcher used to run would have been lucky to become Parliamentary Under Secretary for Latrines. 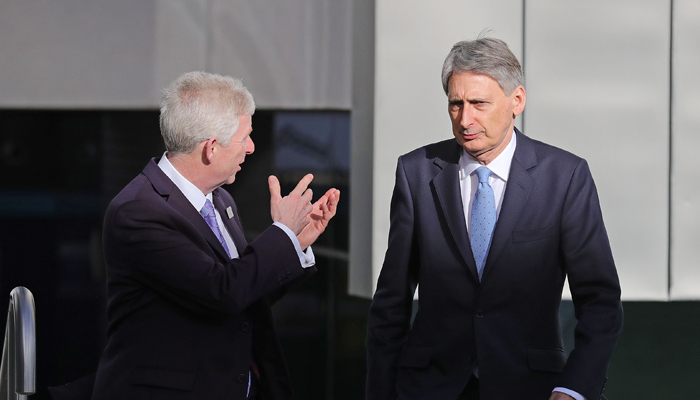 But in the land of the blind, the cockeyed man is King. So Phil is Chancellor, still cock of the walk, despite a climbdown that is, in its way, as reprehensible and clumsily executed as the original error.

In a typical Phil phrase – given he’s a guy who speaks English as if it’s a second language - he declared that the rise in NIC he announced breached "the wider understanding of the spirit" of the manifesto, whatever that might mean.

He then went on to say it was the right thing to do etc, etc, (continued page 94).

A range of interesting questions arise. Why did neither he, nor indeed Mrs May, realise that all this was in breach of "a wider understanding of the spirit of the manifesto"? Hadn’t Feeble Phil read the manifesto? Did none of his colleagues tell him it was a breach? Or were they all on their Alice in Blunderland journey together?

Hammond should have been removed. Or if he wasn’t a smug dunderhead, with a skin thicker than a rhino, he would surely have resigned. Because, make no mistake, this was the biggest Budget humiliation inflicted on a Chancellor in living memory, even worse actually than Osborne’s "Omnishambles" one.

But Futile Phil remains, because, the truth is, there’s nobody else.

In recent times, when Chancellors got in trouble, the Tories would regularly replace them by moving across the Foreign Secretary. It happened to John Major, and indeed to Philip Hammond.

So Boris as Chancellor? The very idea produces gales of laughter everywhere. Indeed, to be fair, because Boris doesn’t take himself as seriously as Phil does, the Big Blonde Brute himself would consider it a joke. Because Boris knows he’d have to learn to count first.

So where else would you look amongst senior members of the government?

In a wonderful piece of controlled invective last month, Peter Oborne, surveyed the May administration, and deemed its leading lights to be woefully inadequate for the tasks they currently undertake, let alone becoming responsible for the nation’s finances at a tricky time.

Amber Rudd is the most inexperienced Home Secretary ever. Liz Truss is a lightweight Justice Secretary, with no experience of the criminal justice system, who, when she dons her Lord Chancellor’s robes, looks like she’s escaped from a circus.

The Education Secretary Justine Greening is widely derided around Whitehall, and Mrs May seems to be running the education brief herself.

On and on it goes, with Sajid Javid the only numerate senior member of the government. But, as Osborne observed, seemingly entirely lacking in political judgement, and is perhaps, though it’s difficult to believe, even more prone to pratfalls than Phil.

So a humiliated Chancellor returns to the Treasury today one suspects a bit like one of the Bourbons, of whom it was famously said, never forgot anything, and never learned anything.

Will Phil be more fit for purpose? Only a sea-green optimist will believe so.

As for Theresa May, who had such a good day on Monday, seeing off revolting MPs and Peers, and telling Mrs Sturgeon to stick her referendum where the sun don’t shine, where does all this leave her?

No 10 spent most of yesterday claiming the NIC rise wasn't a breach of the manifesto. Yet she withdrew it with unseemly haste; a combination of obduracy, weakness and panic that isn’t reassuring.

Which leads me to my final thought for today.

When you also look at the state of the Labour Party under Corbyn, and the feebleness of the Lib-Dems, have major British politicians ever seemed more inadequate for the tasks they face than they look now?

LBC Views: Boris Johnson is a problem that the Tories are unwilling to solve