Brexit: What Happens This Week In Parliament?

Just days after the UK was originally due to leave the European Union, MPs are now deciding for a second time on a number of ideas to get Parliament out of its current deadlock.

Today's indicative votes, a non-legally binding way of gathering consensus amongst MPs, will be the first thing to happen in what will be a testing week for the Prime Minister.

With some MPs speculating that Theresa May could soon resign, and calls for a general election continue, what is happening this week in Brexit?

MPs have second round of indicative votes:

After the first round of indicative votes resulted in all options being rejected, the Speaker will reselect new motions out of a possible nine to be voted on at around 8pm tonight.

Some of these proposals include a plan to keep the UK in a customs union and a single market, the 'Common Market 2.0' idea, as well as a plan for just a customs union on its own.

There is also a potential for MPs to vote on a proposal for a second referendum, which was also voted on in the first round of indicative votes.

Will there be a fourth meaningful vote?

MPs voted to reject Theresa May's Brexit deal for a third time on Friday, with the smallest defeat of its history.

But whilst support for her deal seems to increase with each vote, there is still every chance it will be rejected a fourth time.

In the case that it is defeated again, the Prime Minister would need to chose whether to refuse to implement the 'will of Parliament' or take the plan favoured by MPs back to Brussels.

Rejection also paves the way towards a no-deal Brexit, which Theresa May has vowed against throughout the negotiations - insisting that her deal is the right way to leave the EU.

Will there be a general election?

Under the Fixed Term Parliament Act, the UK is not expected to go to the polls until 2022, but there are still ways for a general election to be brought sooner.

First, if enough MPs in the House of Commons get behind a motion of no confidence in the government, and then no party can succeed in winning the confidence of the House over the following two weeks, then an election is triggered.

Otherwise, at least two-thirds of MPs would need to vote in favour of holding an election.

Jacob Rees-Mogg told Nick Ferrari that a general election would be "unwise" for both his party and Labour.

"You've got all these Labour MPs in Leave seats who have let down their voters, and you've got a Conservative Party that has failed to deliver on its manifesto. Who would people vote for?" Mr Rees-Mogg said.

Will Theresa May resign over Brexit?

Theresa May indicated that if MPs get behind her withdrawal agreement that she will resign, allowing somebody else from her party to lead the second phase of negotiations with the EU - as they head into discussions over a trade deal.

But that vote was defeated, leaving uncertainty over if and when she might resign.

Richard Drax, a Conservative backbencher in favour of leaving the EU, told Matt Frei he "wouldn't be surprised" if Mrs May resigned this week.

When are MPs debating the petition to revoke Article 50?

With more than six million signatures, a petition calling on the government to revoke Article 50 in order to keep the UK in the European Union is being debating by MPs this afternoon.

The government has already given a written response to the petition, saying: "This Government will not revoke Article 50.

"We will honour the result of the 2016 referendum and work with Parliament to deliver a deal that ensures we leave the European Union." 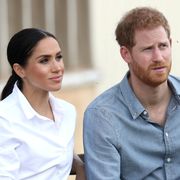 What Harry and Meghan wanted - and what they got