Clock Change 2018: What Effect Does Time Adjustment Have On Your Body?

The clocks go back this weekend which is great if you want to spend an extra hour in bed - but we’ve been looking into the impact time change has on your body.

On Sunday, October 28th clocks will reset one hour at 2am, marking the official end to British Summer Time (BST).

Temperatures are also expected to plummet with rain, wind and snow expected for some this weekend.

While some people rejoice at the idea of the additional hour, some believe it should be stopped.

In a recent survey by the European Commission, 84 per cent of 4.6 million asked said they wanted to stop moving the clocks back and forth.

The European Parliament has now voted to rethink changing the clocks.

It would mean individual member states could make their own choices.

You might think the hour change doesn’t have much of an impact, but research suggests otherwise.

Data shows a small yet significant increase in accidents at work and on the road on the Monday following a clock shift, according to sleep expert Dr Neil Stanley.

He told LBC that there are implications to changing the clock, particularly if you have a busy lifestyle.

He said: “Evidence suggests now that an awful lot of people suffer from what’s called social jet lag - which is we just aren’t getting enough sleep through the week so we catch up at weekends.

“So if you put a kink in the system with a clock change there will be an implication and a knock-on effect.”

Dr Neil explained how it could take two or three days for your body to fully reset.

“Every cell in your body has got a clock in it,” he continued. “Those cells in your liver and your heart elsewhere of course in your brain they’re all doing profoundly important things.

“We are so unconscious of it until we give it a big kick by flying across multiple time zones that we kind of take it for granted.”

You can hear Dr Neil's explanation on the effects of time change in full in the video above. 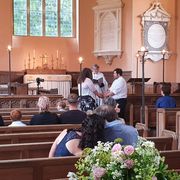 Coronavirus wedding: Getting married? Chris and Fiona's wedding is what you can expect

Coronavirus: On the streets of Leicester, where lockdown remains and fear reigns