This is LBC's guide for how to stay safe online - covering hacking, phishing, trolling, email scams and cyberbullying.

If your account is hacked, it's often because someone has worked out your password. Never use a password that anyone could guess or work out - a middle name, pet's name or favourite football team. Include capital letters, numbers and punctuation for extra security. So if your pet is called Hamish, try using the password Ham15h!

And never use the same password for different accounts. That will mean when people can get into one of your accounts, they can access everything.

2) Be careful what you post online
Everything you write on a social network is public, so don't give out any personal details, such as your address, bank details etc. That would be the equivalent of shouting the details out of the window. Don't write that you are going on holiday, as that leaves you vulnerable to burglars.

Many employers also google prospective employees before hiring, so don't post anything that could damage your chances of getting a job.

3) If you are a victim of cyberbullying, do not answer back
The rule for dealing with cyberbullies is to "stop, block and tell". Don't answer back, as that will only feed the abuse, block the person or message and tell someone you trust.

The new lolzNOTtrolls campaign provides dos and don'ts to help stop online bullying.
Do own everything you say
Do speak only for yourself
Do be the same friend online as you are in person
Do think about the effect your post will have on other people
Do report it if you see any of your friends being bullied.

The same is true of links. Even if it looks like a safe link, it may be forwarding to somewhere you weren't expecting.

4) Watch out for email scams
Spoof emails are very common, ranging from Nigerian princes asking for a short-term loan to proper-looking companies asking you for personal information. This is called phishing. If you get an email from someone like a bank, eBay or PayPal, saying there is a problem with your account, forward it to the company in question to get confirmation it's from them. Most companies will never ask you to tell them your password.

Try searching on google for similar scams. For example, Nationwide bank has an archive of known email scams in circulation.

5) Even emails from friends can be suspicious
Robert Fox, a journalist for the Evening Standard, told of how his email contacts were all sent an email saying he was stuck in Cyprus after having his passport and wallet stolen and asking for money. Some of his friends did this.

All of this was done when a hacker got into his account, changed passwords and locked him out.

7) If you're doing online banking, use all the banks security recommendations
Many banks will recommend adding a piece of software which guards against hackers. Do it. That will give your account maximum protection. For example, HSBC uses a programme called Rapport. Only complete online transactions where the URL starts with 'https' and not just 'http'. The 's' stands for secure.

Don't do internet banking on computers that may be infected. Again, remember your bank will never ask for your login details via email, text or phone.

Alert the people that may have received a spam email from your account to delete it immediately without opening it.

9) Read the small print
When you're signing up for an account, make sure you look for the box near the bottom, which asks if you want to receive more information. Some require you to tick them to opt-in, some require you to tick them to opt-out, so read it carefully. Only fill in the mandatory boxes, marked with an asterisk *.
Some companies will sell your personal data, so make sure you take time to tick/untick the right boxes.

Coronavirus: Five-mile travel restriction in Wales to be lifted from Monday 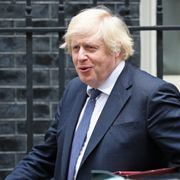 Coronavirus: PM says we're through the worst of COVID-19, but warns 'let's not blow it now, folks'

Coronavirus: Boris Johnson refuses to 'get into details' about dad's trip to villa in Greece