Meaningful Vote Explained: How Many Votes Does Theresa May Need And Will She Win?

Theresa May is battling to get her "improved" Brexit deal through the House of Commons tonight. So will she win? This is what we can expect tonight.

The second meaningful vote takes place in Parliament tonight after the Prime Minister's last-minute agreement with the European Union.

She needs the ERG - the Eurosceptic wing of the Conservative Party - and the DUP to back it in order to win the vote.

MPs will vote on the deal at about 7pm.

What changes has Theresa May agreed on the withdrawal agreement?

The Government says it's secured two "legally-binding" changes to the Brexit deal after Theresa May made a last-minute visit to Strasbourg.

The Prime Minister claims to have addressed concerns over the Irish backstop, less than 24 hours before a meaningful vote.

A second adjustment outlines a commitment by the EU and the UK to replace the backstop with alternative arrangements by December next year.

Will the ERG back Theresa May's Brexit deal?

The answer to this will come down to the legal advice from Attorney General Geoffrey Cox.

His advice previously has been that the backstop could leave the UK trapped in the Customs Union, something that Eurosceptics find unacceptable.

Mr Cox looked at the changes that Mrs May had agreed, but concluded that the legal risk had not changed.

Former Brexit Secretary David Davis told LBC that if Mr Cox believes the withdrawal agreement is legally sound, then he will vote for the deal - and the majority of the ERG would follow. This is now extremely unlikely.

Will the DUP back Theresa May's Brexit deal?

The Prime Minister also needs her confidence-and-supply partners the DUP to back her deal - and again, this will come down to the backstop.

After Geoffrey Cox's advice, the DUP will take their own legal advice before deciding whether to back the deal. We may not know which way they will go until during the Brexit debate this afternoon in the House of Commons.

The signs don't look great though. Earlier today, the DUP's Brexit Spokesman Sammy Wilson told LBC the new assurances on the Irish backstop seem to fall short of what Theresa May promised.

What Brexit votes are happening this week?

There could be three Brexit votes happening this week, depending on the results. This chart shows how the week may develop.

If Theresa May wins her meaningful vote, Britain will leave the European Union on 29th March.

If she loses the vote tonight, MPs will then vote again on Wednesday on whether the UK should leave the EU with no-deal.

If they vote against that - and MPs are almost certain to do so - they will vote again on Thursday on whether to ask the EU to extend Article 50 for a short period.

If they vote for that, the Prime Minister will go to Brussels to ask for an extension, something that all 27 member countries will need to agree to.

If MPs vote against extending Article 50, then what happens next is unclear.

How many votes does Theresa May need to win the Brexit vote?

All 650 MPs in the Commons are eligible to vote, with a majority required to win a vote.

Around 320 votes are needed to guarantee a majority.

This is because there are a handful of non-voting members of the house such as the Speaker John Bercow and Sinn Fein members who do not take up their seats. 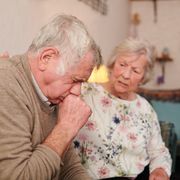 Coronavirus: Survivors can suffer damage to almost every major organ