US Election Explained: It's Not Just For The President

It's not just a President that Americans are voting on tomorrow. There are HALF A MILLION elected representatives, explains US Ambassador Matthew Barzun.

He told LBC: "We've got two great democracies in the US and the UK. And yet they are significantly different.

"With all the interest in the Presidential election back home, let's not forget what else is happening on November 8th. Take a look at the ballot paper in any one state and it's not just federal posts that are up for grabs.

"Across the country, we have half a million elected officials, whether it is state positions or local representatives, voters have their say on sheriffs or school boards, as well as congresswoman and presidents.

"Many places will be holding referenda to on over 150 issues. There's even one about creating a whole new state. That's a whole lot of democracy in action." 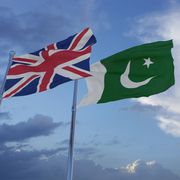