What Is 8chan And What Does It Have To Do With The El Paso Shootings?

Moments before the mass shooting in El Paso, Texas that killed 20 and injured dozens, the gunman allegedly posted his plans and hate-filled ideology on the online forum 8chan.

8chan is a far-right online forum that appears to have inspired the El Paso shooter.

Branded a "megaphone for gunmen" by its founder, one of 8chan's key service providers, Cloudflare has stopped working with it following the shooting.

The site was set up by a computer programmer in 2013 as an online message board for a free speech utopia.

But extremism has become central to the message board's identity and in recent months 8chan has become a go-to resource for violent extremists.

This year the mosque killings in Christchurch, New Zealand, and the synagogue shooting in Poway, California were announced in advance on 8chan, often accompanied by racist writings that seemed engineered to go viral on the internet.

US law enforcement sources have said they are "reasonably confident" that the 21-year-old suspect in Saturday’s massacre and the 8chan document are linked.

If the connection is confirmed, the El Paso attack will mark the third mass shooting in less than six months that was announced in advance on the message board.

The site's original founder, Frederick Brennan has called for 8chan to be shut down and has cut ties with the forum.

On 8chan, users can create and moderate their own boards about topics ranging from anime and cryptocurrency to politics and video games, or post on established boards.

Almost everyone participates anonymously, and the only rule is that users should not post content that is illegal in the United States, such as child-exploitation material.

One of those 8chan's service providers, Cloudflare, which protects websites against cyberattacks, said it would stop working with 8chan on Sunday night.

8chan would have difficultly operating if it didn’t receive protection from Cloudflare, a US-based company that provides internet infrastructure services to websites, including protection from distributed denial of service (DDoS) attacks.

Cloudflare had faced renewed public pressure over its protection of 8chan in the wake of the Christchurch massacre.

"We just sent notice that we are terminating 8chan as a customer effective at midnight tonight Pacific Time. The rationale is simple: they have proven themselves to be lawless and that lawlessness has caused multiple tragic deaths.

"Even if 8chan may not have violated the letter of the law in refusing to moderate their hate-filled community, they have created an environment that revels in violating its spirit."

What were the recent US shootings?

20 people were killed and more than two dozen injured in a shooting in a busy shopping centre on Saturday in the Texas border town of El Paso.

It is being treated as domestic terrorism.

13 hours later in a separate incident in Ohio, nine people were killed and 16 others injured in a shooting in Dayton.

The shooter was shot dead by police officers.

President Trump has condemned the attacks.

Today, I authorized the lowering of the flags to half-staff at all Federal Government buildings in honor of the victims of the tragedies in El Paso, Texas, and Dayton, Ohio....

Julian Assange 'in dire state of health due to psychological torture', doctors claim 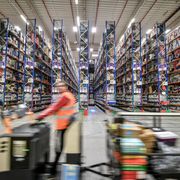