Explained: What Is The Iran Nuclear Deal?

Donald Trump has announced the US will pull out of the nuclear deal with Iran - but what does that mean?

The President has been a fierce critic of the accord and previously warned he would withdraw the US on 12 May unless its “disastrous flaws” were fixed.

The UK, France and Germany had been pushing for Trump to keep the agreement - but their efforts appear to have been in vain.

In an address on Tuesday, Trump described the deal as "horrible" and "one-sided" as he announced new "powerful sanctions".

He said: "In fact the deal allowed Iran to continue enriching uranium and reach the brink of a nuclear breakout."

- What is the Iran nuclear deal?

It’s official title is the Joint Comprehensive Plan of Action (JCPOA) and was agreed to by Iran, the US, the UK, Russia, France, China, Germany and the EU back in July 2015.

It’s aim was to make sure Iran’s nuclear programme remained “entirely peaceful” by limiting the size of its stockpile of enriched uranium.

Iran also agreed to limit the number of centrifuges installed to enrich uranium and modify a heavy water facility which was filled with concrete.

In exchange, strict sanctions imposed by the UN, US and EU which were crippling Iran’s economy were lifted.

- Why is Donald Trump against the deal?

The US President has not been shy in making his criticism of the accord known.

His distaste for the deal formed part of his election campaign in 2016 - in which he called it “crazy” and “insane”.

His main objection to the agreement is the so-called “sunset clause”.

It means Iran’s nuclear activities are only limited for a fixed period of time.

It means the country could resume part of its nuclear programme after 2025.

LBC’s Simon Marks says President Trump is taking a “high-stakes gamble” in a hope Tehran comes back to the negotiating table when new US sanctions are imposed.

But, European companies doing business with Iran could be caught in the middle.

- What does the rest of the world think?

The UK joined the likes of France and Germany in calling for the President to keep the agreement in place.

Boris Johnson said “only Iran would benefit” from scrapping the deal.

Speaking on Monday, the Foreign Secretary said Trump was “right to see the flaws in the deal” - but argued they could be fixed.

He said: ”If you do that you have to answer the question what next? What if the Iranians do rush for a nuclear weapon?

"Are we seriously saying that we are going to bomb those facilities at Fordo and Natanz?

"Is that really a realistic possibility? Or do we work round what we have got and push back on Iran together?"

French President Emmanuel Macron warned war could ensure if the accord was scrapped.

“We would open the Pandora’s box. There could be war,” he told German weekly magazine Der Spiegel.

But added: “I don’t think that Donald Trump wants war.” 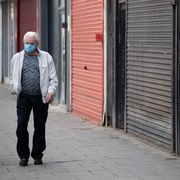