How does the US election work? Which are the states you need to watch out for? Here are the answers to everything you need to know.

How does the election work? What is an electoral college?
The US election isn't just one election. It's actually 50 separate elections, one for each state. Each state has a certain number of points based on population.

The total number of points is 538 and the winner needs to get to 270 to get a majority and become president.

US Ambassador Matthew Barzun explains it all below.

What are the key states to look out for?
All eyes are on three states, that will swing the election: Florida, Ohio or North Carolina.

Florida has 29 electoral college points and is always decided by just a few thousand votes. That takes a candidate a huge way towards the 270 to get a majority.

The result in Ohio has mirrored the national outcome in every election since 1960 - so the candidates are desperate to win this bellwether state.

When Barack Obama won North Carolina in 2008, he was the first Democrat to do so since Jimmy Carter. Donald Trump will need to win it back to have any change of winning.

"Mrs Clinton's firewall is actually a fairly formidable one. She could lose quite a few states as long as she holds on to Colorado and it's presumed that she would win Virginia on account of her Vice-Presidential running-mate, Mr Caine.

"For that reason, she has a fundamental advantage that Mr Gore did not have in 2000 when he lost narrowly." 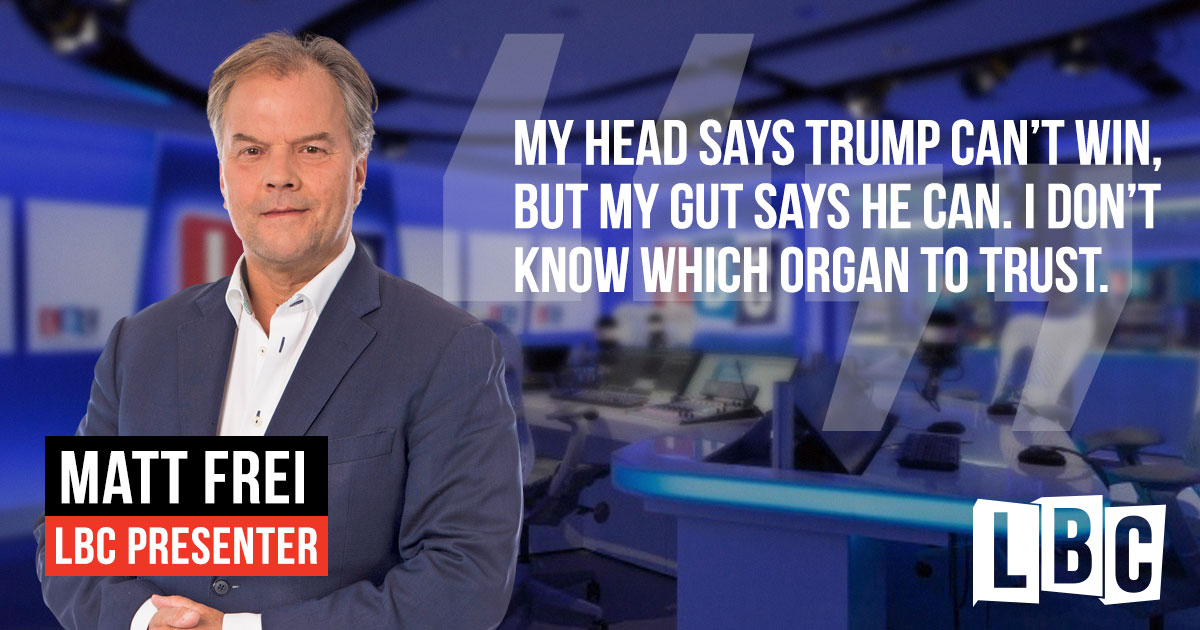 Should I stay up overnight to listen to the results on LBC?
The result could be determined fairly early at 2am UK time when the polls close on the East Coast. If Hillary Clinton looks like she's pulling ahead in any one of the key states, you can be confident of the result.

If on the other hand, those states are too close to call, the saga will continue until we hear from Iowa, Colorado or Arizona.

Professor Donald Green concludes: "I don't think it will be a marathon, like Bush v Gore, because Mrs Clinton has an opportunity to win if she's able to pull a rabbit out of the hat in any of the core States. That's because the rest of her support in the Rust Belt states and in the coastal states seems fairly assured."

US Election 2016: Key Timings
Voting open throughout Tuesday 8th November.
Tuesday 10pm - Wednesday 5am: Iain Dale and Shelagh Fogarty bring you the latest results and analysis.
Wednesday morning 2am (UK Time): Voting closes on East Coast
4am: This is the time US networks usually start to call the winner.
5am: We're likely to know the winner by now, as Nick Ferrari hosts our Breakfast show live from New York.
10am: James O'Brien will continue our coverage with his analysis of the result - and where we go from here.

Why are states "Republican" and "Democrat"?
US Ambassador Matthew Barzun explains why the usual map we see of a red and blue America is not accurate. The reality is so much more complex.

Coronavirus: 'I'm sad or down most days' - the devastating impact of lockdown on mental health