This was actor Katherine Kendall's moving reaction to Harvey Weinstein's charge or two counts of sexual assault, including third-degree rape.

"To be here today is a big victory," Katherine Kendall said, "I'm emotional. I'm very emotional. I feel like it's personal and all the women that I've met on this journey, I've seen the look in their eyes."

Ms Kendall said, "It's hard to watch a woman on the stand, it's hard to watch people discredit her and make it her fault knowing that it's not. It means a lot to me that the jury took this seriously and saw it the way that I saw it, that we saw it."

Katherine Kendall said she was "terrified" of opening up after she accused Harvey Weinstein of harassing her in 1993.

"I was scared of Harvey. I was scared of the power he had," she said, "there was no place you could turn where he wouldn't be there... that threat just emanated from him."

The actor said she felt empowered going public as she was able to connect with other women who had a similar story to hers: "coming out of the shadows and knowing you're not alone is a really powerful thing to do."

"It feels great," she said, "I just feel proud of all the people that works so hard to get here. That the world is listening. It's an amazing feeling."

Weinstein, 67, was convicted by jurors on two of the five charges he faced - a criminal sexual act in the first degree and rape of the third-degree.

But he was acquitted of the most serious charges, predatory sexual assault and first-degree rape.It took the jury of seven men and five women a total of five days to reach their verdict. He could now be facing a lengthy jail sentence for his crimes.

Weinstein also faces charges in Los Angeles of the alleged rape and sexual assault of two other women, of which he is yet to enter a plea.He was once considered to be one of the most powerful men in Hollywood, but accusations against hi from more than 80 women ushered in the Me Too era. 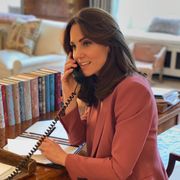