Will Sir Keir Starmer be the next Prime Minister? Lord Mandelson gives his prediction

Will Sir Keir Starmer be the next Prime Minister? Lord Mandelson gave his prediction about the leader and the party's abilities to win over the public.

Lord Peter Mandelson predicted the Labour leader will be a mix between Neil Kinnock and Tony Blair: "Neil Kinnock came from the left and he had to save the Labour party to reconstruct it which he did. Tony Blair then later on turbo-charged the whole thing, modernised that party.

"I think that Keir Starmer at the end of the day and has got to be a blend of both, certainly if he's going to turn the party's fortunes around in one turn."

Eddie Mair asked Lord Mandelson if Sir Keir was right to sack Rebecca Long-Bailey from the Shadow Cabinet last week after she retweeted and article containing an anti-Semitic conspiracy theory.

The Labour peer said he made the right move, and it showed he doesn't duck decisions or "run for cover": "I think it speaks to something about him, both his judgment and his strength of character.

He continued that Rebecca Long-Bailey, who has written an article about her dismissal, will not become a thorn in Sir Keir's side as "this was a mess of her own creation...and she left Keir with no alternative but to make a tough decision."

"The party has to stand for a set of values and principles and very importantly, they are about putting an end to the awful anti-Semitism that disfigured the party during Jeremy Corbyn's leadership...this was an early test and he passed it with flying colours," Lord Mandelson said.

"As for Rebecca in the future, if she wants to cause trouble obviously it's up to her to do so. Will she be a thorn in the thigh of Keir? I don't think so because I don't think she commands that support in the party, I don't think she has the charisma or the appeal to mobilise the party against Keir Starmer."

Eddie asked Lord Mandelson what the likelihood of Labour winning a majority at the next general election.

Lord Mandelson replied, "I think it's possible but by no means certain. I think it requires not just a leader who has a firm grip of the party, as clearly Starmer has...but people have got to feel that the party is not lagging behind its leader.

"The party has a number of structural difficulties. It's got to make up for a lot of lost time and ground that it's seeded to the Tories during the Corbyn years and the party's got to put its skates on if it's to change and measure up to where Keir Starmer has started and where I think he intends to go on." 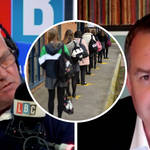 Heat-related deaths could triple in next 30 years, research suggests