"We kept on saying": Care home chief on sector being "forgotten" by the government

This care home chief tells Eddie Mair how he thinks the peak car home deaths have not yet been reached and how they "kept on saying" to the government they needed PPE.

Sam Monahan is the chief executive of MHA, the UK's largest charitable provider of care accommodation, and operates 133 care facilities.

Mr Monahan said the figures are starting to "catch up with the reality we've been experiencing" and estimated over 5000 deaths may be nearer the mark. He predicted that care home deaths have not seen their peak as "those numbers are continuing to rise."

Mr Monahan agreed the care home sector had been forgotten in the pandemic as the critical concern was whether the NHS would be able to cope. Particular problems came because the supply of PPE from the government was not robust or consistent enough, he said.

The care home chief could not answer whether elderly residents would have died directly from a lack of PPE because there "wasn't the testing there" in the initial weeks.

"If we'd had testing from the outset and if we'd had it on a routine basis, which is what we're arguing for, then we could've known who actually had the virus and better managed their isolation," he said, observing that some elderly residents and staff were asymptomatic.

Eddie asked whether it made his "blood boil" that the care sector was essentially forgotten.

"We did know, we did say, we kept on saying and we are trying to manage what we are facing at the moment and trying to do it with care and with professionalism. But we could have been in a different place where it didn't have to be like this," he said, reiterating that early tests and consistent PPE supplies would have had a critical impact.

Mr Monahan said, "We know what we need right now and it's still not there.

"The supplies that were existent before the pandemic had run down so they weren't at the right level they should be so we started from a low base...but the NHS clearly needed the PPE."

It was reported that the government counted a pair of gloves as two pieces of PPE and Eddie questioned whether this was sleight of hand.

"I think it is but I think the challenge is we need what we need...and we need it in the places we need it...We've had to use our own charitable funds in our case to buy our own PPE at more expensive prices just to make sure we have sufficient stock," Mr Monahan said. 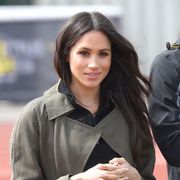