Ash Sarkar: 'Journalism is at the mercy of unaccountable tech giants'

The political commentator reflects on how social media companies hold immense power over journalism in the modern world.

"Those two hours, they were worrying for me" Ms Sarkar joked, adding "this is why I think collapsing everything into cancel culture is a problem", given that Iain Dale brought the news up in relation to a Cross Question call on cancel culture.

"We talked to the Youtube execs," she explained, "they told us it was human error. We got wrongly flagged as spam."

Read more: James O'Brien points out the 'problem' with the Online Harms Bill

The political commentator went on to say that it by no means came from cancel culture, noting that "[the removal from Youtube] doesn't seem to have emerged from any outcry."

When Iain pointed out that he had tweeted support, Ms Sarkar noted that Novara "did really appreciate the support which came from all sides of politics".

She then explained that the event shed a sinister light on social media companies: "Regulated journalism is now at the mercy of these unaccountable tech giants where the internal governance is like a black box, we don't know what goes on inside."

"That's a very vulnerable place for a democracy to be in."

LBC Views: It comes to something when John Major and David Mellor lecture about sleaze 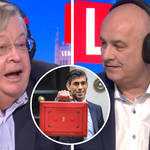