Iain Dale forensically challenged this caller who said China are "right to take back Hong Kong" after they proposed new security law for the region.

Nearly 200 senior political figures from around the world have condemned China's new security legislation for Hong Kong, which has already been backed by the Chinese Parliament.

Countries including the UK, Australia and Canada have said they are "deeply concerned" by China's proposed national security legislation for Hong Kong which could undermine the one country, two systems principle.

The UK could offer British National passport holders in Hong Kong a path to UK citizenship if China does not suspend plans for the security law as a response, Foreign Secretary Dominic Raab says.

Caller Maya accused Iain Dale of having a "very colonial attitude" towards Hong Kong: "Hong Kong has always been Chinese, the British stole flooded Hong Kong with opium and stole it from the Chinese."

"You're right, it was a British colonial territory, it is now under Chinese control. There was an international treaty where China made certain guarantees and all I'm saying is they're flouting those guarantees," Iain said, pushing Maya to answer whether China has reneged on its international obligations or not.

"So what if they have, it's their land," Maya said.

Maya said: "The Chinese were only taking back what was rightfully theirs. They don't have to bow down to the British anymore. You're colonial."

Iain insisted he wasn't and he is only asking the country to adhere to 50 year international agreements it signed in 1984 - he objected to Maya excusing countries going against their international obligation.

"You seem to think China can do anything it likes!" he exclaimed. 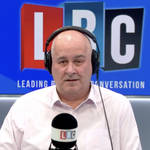