A former Brexit minister and Labour MP clashed live on LBC as questions were raised over the Irish border after Brexit.

Ms Braverman suggested the impasse on the border could be solved with technology.

But her Labour counterpart was quick to ask whether such solutions even existed. 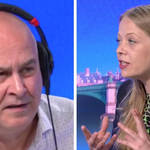