...but insists he won't be running in this leadership election.

Speaking to Iain Dale this afternoon as the race to replace Diane James began, Nigel was keen to make clear he won't be standing this time out.

"Can we be 100% sure that there is no chance of you being persuaded by anybody to come back in the next few months and keep the leadership?" asked Iain.

"A thousand pounds to Global's Make Some Noise charity appeal if you do?"

"You can put a couple of noughts on the end, I don't care!" Farage told Iain with a laugh.

But would he rule out ever leading Ukip in the future?

"It is not my intention," he said. "I'm getting a bit old for that sort of thing."

"That's not quite ruling it out, is it?" asked Iain.

"What Diane James saw in those 18 days was the fact that being leader of Ukip meant she would not have a life of any kind at all.

"We have had such unpleasantness, frankly hatred, whipped up against us, entirely falsely. You're frankly not free to walk down the street.

"It takes somebody with tremendous courage to do that job."

'I receive more racism now than I did 30 years ago, because of social media' 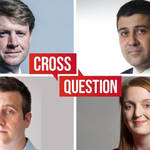 Free fully-vaccinated from having to isolate sooner than August, Boris Johnson told

'Get your freedom back': Gareth Southgate urges young people to get vaccinated

Daily coronavirus cases in the UK fall again as 36,000 new infections are reported