This former Corbyn supporter perfectly summed up how James O'Brien feels: "I don't recognise the Labour Party any more".

James was discussing how Mr Corbyn would both balance his promise to recognise the opinion of the membership with his insistence that the UK will leave the EU.

Rhi in Cardiff called James to explain that she used to back the Labour leader but has become disillusioned with the way he is running the party.

She told James: "I am a former Corbynista. I drank the kool-aid as they say. I've been a Labour member for seven years. I cancelled my membership last week.

"It was mainly because I don't recognise the party at the moment.

"I became a big supporter of Jeremy Corbyn initially because, way back when I went on a march against the Iraq War, I heard him speak and thought this was a man with integrity.

"This isn't easy for me to admit. Now, I think what on earth was I thinking? The way he's leading the party now, I can't believe he's putting so much emphasis on his own political ambition."

James agreed, adding: "When it all started, I was a little skeptical, but I really wanted to get on board, most because of austerity-related issues. The bottom line for me would be redistribution of wealth. People were telling me he was the man to deliver this.

"I was saying he's never going to get into power if he does this, this and this. But they said James, he's different, it's a kinder, gentler politics - unless you're Jewish - and he's not going to sacrifice his morals on the alter of the pragmatic pursuit of power.

"And now, exactly the same people are telling me he is sacrificing his morals on the alter of the pragmatic pursuit of power.

"I don't see how they can support both sides of the argument." 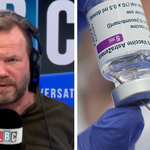