The media's portrayal of key workers in years gone by has led to the conditions these workers now face during the coronavirus crisis.

Reflecting after the nationwide minute's silence to remember key workers who have died on the frontline against coronavirus, James O'Brien was taken aback by the public's support for workers that they once were convinced to oppose.

He spoke about a newspaper article he read around the time he joined LBC "describing firefighters as if they were nazi infiltrators" and how this media portrayal affected the public.

"I watched members of the public being groomed and gaslit into attacking firefighters believing nonsense that they all have second homes in Ibiza." This was a turning point for James.

He remembered being "absolutely baffled about how anybody could be completely turned against people that run into our house when it's on fire with the intention of carrying us and our children out."

James asked listeners to recall "the doctors strike a couple of years ago" where some of the UK's newspaper media was "encouraging the British public to turn on doctors".

He remembered public opinion of the strikes at the time and urged Brits to be mindful of this for the remainder of the coronavirus crisis.

"Think about that on Thursday night when you're standing on your doorstep hitting a saucepan with a wooden spoon - were you one of the people that used to ring LBC putting the boot into doctors and claiming they were greedy?"

James pointed out that the attitude of the public during the strikes in years gone by has led to the desperation key workers are experiencing during the coronavirus crisis.

"If you got turned against all of them you're probably complicit in the scenario we're currently contemplating where we're expecting them to go to work ill-equipped."

He added to the mix an anti-immigration sentiment that was rife in the NHS through media coverage at the height of the campaign against key workers.

"We know now the phrase 'we should train our own' was one of the most despicable examples of subtle racism this country will ever see - how many of the dead were born elsewhere?"

"Think on that as you hit your saucepan with a wooden spoon on Thursday night." 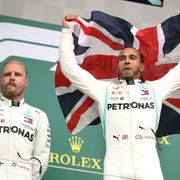