A new poll has revealed that two-thirds of Conservative members believes parts of Britain are under Sharia Law. This is James O'Brien's message to them.

The YouGov poll also found that half of Tory members believe that no-go zones in which non-Muslims are not allowed to visit exist in the UK.

And 39% thought that Islamist terror attacks reflected widespread hostility to Britain among the Muslim community.

Responding to the poll on his LBC show, James said: "Where else do you get this from, if not from Facebook. How does someone living in Dorset end up convinced that parts of Britain operate under Sharia law?

"It's something so utterly bonkers, it doesn't even merit a mention. They read about it in made-up forum.

"You can't insult these people because they are scared. Their reaction is visceral, it's emotional, it's real.

"The fact that the person who shouted fire in your ear is a liar, that doesn't make your reaction stupid or racist."

Watch the full response at the top of the page.

"There is no evidence to suggest a second wave of coronavirus," professor says 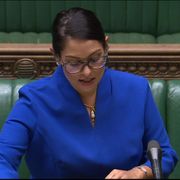