Kevin Maguire: "Poppy Police" Go Against What The Poppy Is All About

Kevin Maguire denounces 'poppy police' for complaining about people who don't wear the poppy or shops who don't take a donation box.

Kevin Maguire says it is "absolute nonsense" that people complain about people not wearing the poppy for Remembrance Sunday and that some shops don't take a donation box for the Royal British Legion.

Speaking on LBC, he said: "The Royal British Legion every year has to fight a rearguard battle about people who are tempting for their own ends to politicise the poppy.

"Turning on people who aren't wearing the poppy, complaining about shops that don't take a box, or they don't allow a poppy collector on their premises.

"It's absolute nonsense and goes against what the poppy is all about."

Tom Swarbrick labels this caller the "most frustrating call ever" 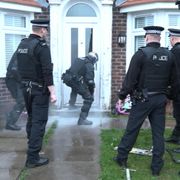