Maajid Nawaz separates the differences from authoritarianism and liberalism to left and right wing politics after an interviewer apologised for misquoting a government advisor who was later sacked for his remarks about China, Islam, and George Soros.

Maajid Nawaz said a journalists 'deliberate misquoting' of an interview with a now-former government advisor was "dishonest" and "appalling", and "undermines the credibility of mainstream media".

Roger Scruton was fired from the government's housing commission for calling Islamophobia a "propaganda word" and for suggesting Chinese people were 'clones' of each other.

The chair of the Building Better Building Beautiful Commission said of China: "They’re creating robots out of their own people… each Chinese person is a kind of replica of the next one and that is a very frightening thing."

But the author of the interview also came under fire for misquoting some of the quotes on social media, leading to him to issue an apology.

"Shame on George Eaton at the New Statesman," Maajid said.

"He's apologised now for misquoting Scruton on his feed, but it was a 'sorry not sorry'.

"I'm not going to defend Scruton, but what I'm upset about is when a journalist misquotes people for political leftist ideological reasons or even alt-right reasons, when they do that it undermines the credibility of mainstream media."

Maajid continued: "That whole Scruton thing was a mess, because now we don't know what to trust.

"The interview he did with George Eaton reports he said Muslim tribes are invading Europe.

"Clearly I would condemn such language, but I no longer don't know whether he said it or not because the interviewer has messed up the quotes with a left-wing agenda to deliberately portray Scruton as saying things he did not say.

"Now I don't know if the rest of the interview is true."

He then separated authoritarianism and liberalism from party politics, outlining how it was possible to be both right-wing and liberal, and Labour-liberal.

"You can be left wing or right wing," Maajid said.

"Authoritarianism and liberalism is the correct contrast to make, often people use the word liberal synonymously with left-wing but that's not correct.

"You could be Ken Clarke Liberal-Conservative or Keir Starmer Liberal-Labour.

"Both of those individuals are on the bottom half of the cross.

"The hard-left has taken over the Labour Party and the hard-right is yet to take over and hasn't done so the Conservative Party.

"Yes you have racists and anti-Muslim bigots in the Conservative Party, but they're not running the party.

"But in Labour you've got Jew-haters and people who call Jew-haters their friends running the party."

Watch in full at the top of the page. 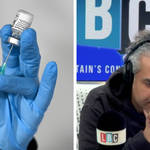 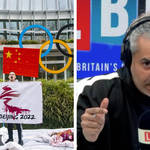 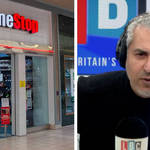