A former Taoiseach said that conviction to leave the European Union is "fragile" and that fears of a second referendum shows 'distrust' in support for Brexit.

John Bruton said he thought 'English nationalism' has been a fundamental problem for the EU and Ireland to deal with during Brexit negotiations.

The former Taoiseach said the European Union was set up to "get over the problems" of nationalism in Germany and Italy in the 1930s and that nationalism in the form of hostility to neighbours has been a cause of "huge suffering" in European history.

Speaking to Matt Frei, he said: "It is unfortunate that we're having to contend with nationalism in one country at the moment."

But when put that he was comparing Brexiters to Benito Mussolini and Adolf Hitler, he said: "I'm not, I'm just saying that nationalism can lead you into a very dangerous direction."

"The view of english nationalism that to have a second look at that decision would be a betrayal suggests that the conviction about leaving the EU is a fragile one.

"It suggests they don't trust their own people."

Northern Rail will be nationalised this week, Transport Secretary reveals 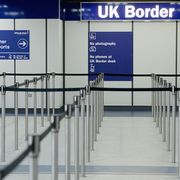 Ministers warned there is 'no perfect system' on immigration

Professor just back from Wuhan lays into government's coronavirus advice