All that bleeping is making you itch 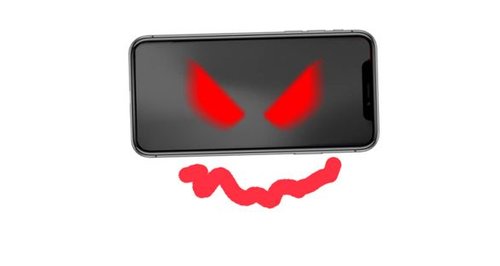 The thing you have in your pocket is a giant distraction machine.

Steady on there, I'm talking about your phone.

Every time your phone beeps or bleeps or buzzes or pings, it sends a shot of cortisone around your brain that makes you anxious.

It's that old FOMO: fear of missing out.

The constant calls for attention mean that you cannot give whatever you are supposed to be doing your full consideration. It's like an infant, always making a noise, insisting on being heeded.

Teenagers are particularly susceptible - brain scans show teenagers who have become hooked on their phones are more depressed, anxious and impulsive.

And if there's one group of people that don't need to be more depressed, anxious and impulsive, it's teenagers.

On grown-ups, it makes you miss deadlines, fail to be productive and appear as though you lack diligence.

Your smart phone is making you stupid. I have to admit that's a bit of relief – I thought it was just the way I am, turns out my iPhone is making a dummy out of me.

It's worse than that though because even if you switch your phone off, the computer on your desk is at it as well.

The bings and bongs from that are constantly demanding your time as well, so you cannot do the work you would have been doing if you hadn't been interrupted.

Scientists have even put a number on it – if you let your mind be perpetually disturbed by the persistent alarms of arriving communications, your productivity can go down by 40%.

It's a wonder we achieve anything at all.

If you get to the end of the working week and look back and reflect on what you have not been able to get done, don't despair – it's not that you are lazy, it's the internet's fault.

Doesn't it feel better to have something to blame?

Unfortunately, having an excuse for a lack of accomplishment does not mitigate the harmful effects of being placed always on edge by the vibrations and alarms of incoming messages.

All that cortisol running about your brain is usually to aid a flight-or-fight response.

It gears the body up for explosive action, it sits the mind on the edge of its seat, so to speak.

When no such action is forthcoming, when you do not spring out of your office chair and sprint down the corridor, the mind and body do not know quite what to do with all those danger chemicals.

The heart rate goes up, the muscles tighten but there is no release.

The effects build up to leave us in an almost constant state of fear. Every alert from your connected device means that supply of cortisol is topped up and eventually, we seek it out as a high.

It is the reason that people go on roller-coasters and see scary films – it is a little thrill without the associated dangers of doing something really perilous.

As long as it is infrequent, those activities add to the pleasure of life. If they are constant, on the other hand, they start to make you ill.

Imagine what life would be like if you had to travel everywhere by roller-coaster.

The result is more or less the same if you have your phone sound the arrival of every update, news story and message. You feel anxious until you can look at what that sound relates to.

We have become addicted to it, which is exactly what the tech giants want.

It didn't happen by accident, they planned it that way.

How the makers of other goods would love to get us addicted to their product.

There are laws about that though, especially if they have an effect on the brain.

Recreational drugs are illegal for that very reason.

Happily for the phone manufacturers and the social media companies, their products do not make you high, they only make you ill, so as far as Her Majesty's government is concerned, that's all right then.

Swarbrick On Sunday | Watch live from 10am