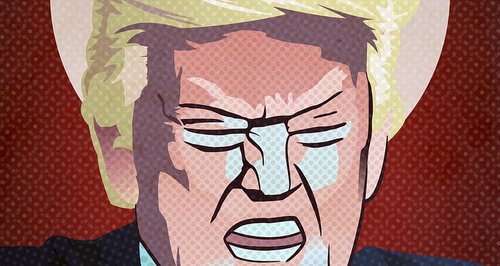 Donald Trump is the most magnificent person to ever hold the office of President of the United States of Amersh.

At least that's how he sounded at the end of a typically unhinged and rambling speech about how fantastic he was and how tremendous is his orange enormity and how huge his hands are.

Oh, and there was the thing about re-annexing Jerusalem for the Israelis, in the interests of peace and stability!

The riots across the world and predictable deaths that followed that announcement were given less prominence than might have been expected because of the way in which he concluded his address.

That makes as much sense as anything else he has ever said.

But it got worse. Like an automaton on the blink, or a robot running low on batteries, he seemed to slow down and slur his garbled message and only just got to the end without smoke coming out of his ears, the lights in his eyes going out and falling flat on his face to say, “God bless the Unitesh Shtsts”.

Some commentators have mused that a plate holding some of his bleached bright-white teeth in place became loose and caused his speech patterns to falter.

There seems to be an upswell of agreement that the President is not well. I mean, even less well than previously assumed.

The chairman of the Senate Foreign Relations Committee expressed fear that the president’s erratic behaviour is putting the United States “on the path to World War III.”

The Secretary of State reportedly called the president a “moron.”

The National Security Adviser allegedly said Trump has the mind of a “kindergartner.”

Republican political campaign manager Steve Schmidt said that “the question of his fitness, of his stability is in the air.”

These are his own people.

Theresa May went out on a limb and said that he was “wrong” to re-tweet anti-mulim videos and that recognising Jerusalem as the capital of Israel was “unhelpful”.

That is the verbal equivalent of dancing carefully around a grumpy bear, on ice, in stilettos.

American newspapers have not been so circumspect.

The New York Daily News, opined that “the President of the United States is profoundly unstable. He is mad. He is, by any honest layman’s definition, mentally unwell and viciously lashing out.”

If he were a boat, he would be clear of the jetty and lurching out to sea over storm tossed waves, listing heavily, with a fire in the engine room.

The White House department of non-fake news explained, "His throat was dry. There’s nothing to it.”

That might wash if it were an isolated incident but Trump exhibits all the self-control and thoughtfulness of a two year old that's had his lolly yanked out of his mouth.

This might all be amusing if he were not trailed everywhere he goes by a man with a briefcase that holds the key to launching the deadliest weapon that Man has invented, with the ability to destroy all life on earth.

It is the sort of thing that would not be out of character for Trump to do, in a fit of pique, if he overheard someone making fun of his hair.

And if you think that we are safe, far away from North Korea, or wherever Hillary Clinton lives, then think again.

During an interview in 2016, the most powerful man on earth refused to rule out using nuclear weapons in Europe.

May God have mercy on ush allssh.

When can pubs and restaurants open indoors in England?