Donald Trump has changed his mind.

Inside sources in the US and Britain say that Trump will strike a free trade deal with the European Union before it agrees one with Britain.

If true, it would signal a dramatic U-turn on the part of the U.S President.

Dramatic, but not entirely unexpected.

Trump has changed his mind on everything he has ever said and chooses his positions depending on who he spoke to last.

He wanted to appoint a special prosecutor to lock Hillary up, but after he had won said to one of his hollering fan rallies: "That plays great before the election, now we don't care".

There was going to be a big beautiful wall all the way across the southern border. Now it won't go all the way, it won't all be a wall and Mexico is not going to pay for it, after all.

He was not going to get into any foreign wars, now he's starting them in every country he can name off the top off his head.

NATO was obsolete, now it isn't. It is almost as though he has no idea what he's doing and is making it all up as he goes along.

According to the Times, Trump has ‘softened’ his opposition to a US-EU deal after Angela Merkel, the German chancellor, convinced him that reaching agreement would be simpler than he thought.

He likes simple thoughts - they're his favourite type.

Apparently, his administration thought they would be able to open talks with individual EU members. He had to have the concept of the European Union explained to him.

Sources say there has been a ‘realisation’ in the White House that a trade deal with the EU, would  bring greater rewards than a deal with little Britain.

Mrs Merkel is said to have told senior colleagues that Trump asked her 10 times if he could work out a trade deal with Germany before finally getting the message he had to negotiate with the EU as a whole.

That's probably why he wouldn't shake her hand in the Whitehouse. She had to sit him in the corner with a dunce hat on and he was still smarting about it.

The US exports five times the value of goods to the EU than it does to Britain, so The Donny has re-thought the queue for a trade deal.

The President has changed his mind. They should write that on the front of his souvenir baseball caps.

He is also OUT of his mind.

Twenty-five leading psychiatrists have broken convention to alert the world that the President of the USA is unstable and should not be left in charge of running a bath, let alone a whole country.

They said that he has clear hallmarks of mental illness and it was their 'ethical responsibility' to warn the American public about the 'dangers' Trump poses to the country....and, I would add, to women in particular.

They said the President displays anti-social, narcissistic and chauvinistic tendencies that, they believe, are grounds for impeachment.

One leading psychiatrist objected to that diagnosis, however, saying that, 'He may be a world-class narcissist, but this doesn't make him mentally ill.'

He leapt to Trump's defence by saying that he feels it is an 'insult to the mentally ill, who are mostly well behaved and well meaning, to be lumped with Mr Trump, who is neither'. 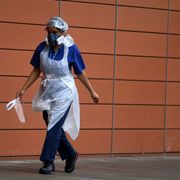