Tube drivers have gone on strike in support of a colleague who allegedly ran three red lights. Someone who drives anything for a living should not be caught going through signals that say stop.

But the lights were not on the roads, that would be bad enough, it was much worse than that. The lights he went through were the ones on the railway lines, the ones that stop one train smashing into another.

London Underground thought that, all things considered, it might be best for the comfort of the passengers if they weren't sent headlong into an oncoming train, so they suggested that the driver might want to do something less taxing for a living.

They didn't fire him, they gave him a less hazardous job, where disobeying commands might not kill so many people.

This was completely unacceptable for the brothers and sisters of the Aslef union, who downed tools and marched off the job in a move reminiscent of the bad old days of perpetual industrial action.

There have been so many rail strikers lately that if they all wore Brutus jeans and orange shirts with collars you could land a plane on, it would seem like the 1970's all over again.

A 24 hour strike of the District Line was organised. If you use that line, your train will have been cancelled for the convenience of a man who doesn't know what the colour red means.

You would have thought the union would have demanded the man's firing. After all, they seem to place customer safety at the top of their priorities when they complain about the reduced role of the train guards.

That concern cannot possibly be fabricated to resist the march of artificial intelligence into the railways can it?

They wouldn't cite safety as an excuse to prevent their jobs being taken by robots would they?

What is not safe would be to allow a driver who sailed through three red stop signals in a four week period to continue in charge of thousands of unsuspecting passengers.

They just want to get in a carriage and find a seat that doesn't have too much urine on it and to avoid catching anyone's eye 'till they get home. It would put a kink in their day to have to pick themselves out of the wreckage of a train crash after a hard day at the office.

Transport for London said it was 'simply not safe for this employee to continue in a role as a driver' and that he was offered another role.

Apparently, the driver agreed to this. I bet he couldn't believe his luck that he was still keeping his pay packet.

The union was having none of it though, and the 800,000 passengers who use the District Line every day had to suffer, as rail passengers have suffered so many times before.

London Underground explained this to their customers but announced that the rest of the lines would be operating “normally”.

There can be no more dispiriting news for the average rush hour commuter to hear that their lines will be operating as they usually do.

The Aslef union balloted its members over the way the Signals Passed At Danger policy was applied to this member of train crew and accused Transport for London of failing to discuss the issue.

What's to discuss? The driver seems to be dangerous in charge of a moving vehicle that is approximately the same weight as Canterbury Cathedral. He should stop driving immediately. End of discussion.

Nigel Holness, London Underground's director of network operations said, 'No disciplinary action has been taken against the employee and our action is in line with the safety policies agreed with our trade unions.'

That seems supine in the extreme – he passed 3 red signals and they still didn't fire him.

Makes you wonder what you need to do to get fired on the London Underground.

Bring a lion to work?

It seems that the belligerence of the unions will be their undoing because you know what wouldn't run a red light? 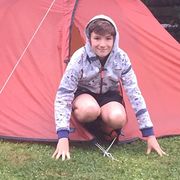 Coronavirus: Boy, 10, has camped in his garden since lockdown began to raise money for North Devon Hospice