The Cause Of Trump's Success? Culprit Found

Some days you wake up and think: how did we get here?

Some days you wake up and think: how did I get here, but that's a different question and the answer usually involves beer.

How did WE get here is a question often accompanied by the shaking of heads, the utterance of the name Donald Trump and the realisation that in a few weeks the world's most powerful and enthusiastic internet troll will be the bright orange leader of the free world.

Sarah Palin, the moose shootin' lady from Alaska, says that it was God that personally intervened to make Donald Trump President.

She said that she saw the evidence of "divine providence" when she was out on the campaign trail. She claims she saw it "first hand". Perhaps the hairspray fumes have gone to her head.

She said, “Prayer warriors across the country, people who perhaps had never expressed their faith in a higher being before, knew that, Jeez, we got to be on our knees asking for a change here, because we’re going down the wrong road."

"We found our revolutionary Donald Trump, he's our messenger. Donald Trump heard the voice of the people and allowed the people to expose what needed exposing."

Well, Jeez, she appears to be completely out of her mind. Maybe she should book in for a consultation with the next US Secretary of Housing and Development, Ben Carson. 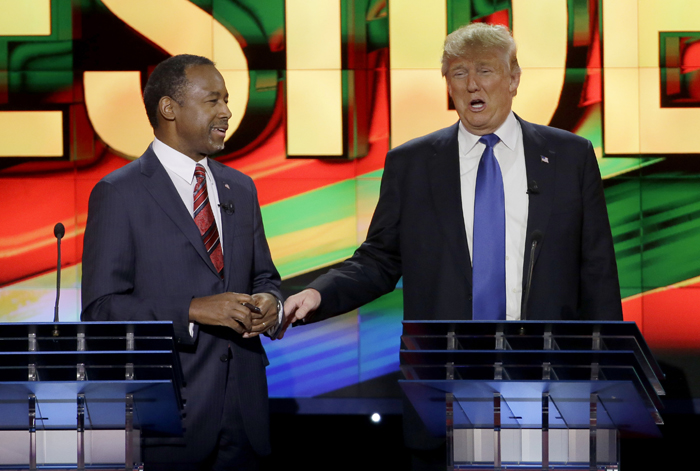 He is the slow-witted boob who, before he retired, was a brain surgeon and seems to be bent on changing that job description from being synonymous with intelligence. It is odd that Trump has chosen Carson to be housing secretary because Trump previously said that Carson had a pathological temper that was incurable, like "child molesting".

It doesn't sound like the personality profile that is required for a job managing low-income housing assistance.

We can add it to the bizarre choices that Trump has made on everything from starting Twitter fights with celebrities, demanding equal time for rebuttal on comedy shows that lampoon him and thinking that no-one will notice the bald spot that covers most of his head if he fashions a Möbius strip of candy floss out of what remains of his hair.

Carson should fit right in though. He thinks abortion should be outlawed in all circumstances, thinks homosexuality is a choice, says global warming is not man made, called Barack Obama a psychopath, said gun control made the Holocaust possible and that Obamacare is like slavery.

That Ben Carson...he's no brain surgeon!