As we approach the end of the month, we peek at our bank balance and wonder where all our money went.

If you are anything like me, some of it went on the take-away you knew you shouldn't have had but you ordered anyway, some went on the alcohol that sent you over the recommended maximum for the week and some went on assisting rich people to buy houses.

A scheme, funded by you, designed to help first-time buyers get on the housing ladder is being used instead by families earning over £100,000 a year.

If you are one of the people in this country that earns that amount, you might not think that it qualifies as being rich, but as it puts you in the top 4% of earners, you are richer than most, so stop whining.

According to the government’s own figures, more than 6,700 households with incomes over £100,000 have bought homes using Help to Buy.

Under this scheme, the Government gives borrowers a loan of up to 20 per cent of the value of a new-build home or 40 per cent in London.

This is to aid people seeking a mortgage but who can't afford the deposit, or at least that was the stated aim.

The problem needed addressing because house prices have risen so much that the home that used to cost a year's wages when your parents or grandparents bought theirs, now costs ten years' wages because we haven't built enough over the years.

The government enacted this plan to supposedly plug that gap between earnings and the cost of buying a roof over your head.

But instead of helping those in desperate need, about one in 20 households who have taken out these loans, provided by you, have six-figure incomes.

Families with incomes of £50,000 or more have now received 40 per cent of those loans,

This makes the scheme seem less like supporting struggling families and more like welfare for the giant building companies.

They are building a small number of expensive homes, which people can’t afford, so they got the government to bung some cash at the potential purchasers so that they'll be able to buy one.

The result is that house prices are kept high because there's an artificial demand for expensive properties that would otherwise not be affordable.

Banks win too by lending out ever more stupendous sums to people that can't afford it, which is exactly what caused the last financial crash.

What could possibly go wrong?

The problem is a lack of supply, and that's partly due to the building companies themselves who have huge areas of land that they own but aren't doing anything with, in order to keep up prices.

Help to Buy is the same kind of idea that fuelled the asset boom and takeover frenzy after quantitative easing, wherein the government took your money, flooded the market with it, the rich helped themselves and instead of trickling that wealth down, as they were supposed to, they bought wine and gold and classic cars and other companies and shares in their own companies, which raised the stock price which kicked in their bonuses, all the while inflating bubbles in prices of everything.

You could call that unintended consequences. That would be the kindest reading of what happened.

A less rosy view would be that the result was exactly as intended – a massive transfer of wealth from the masses to the rich, and particularly from the young to the old

This is the first time in history that the young will be poorer at every age than their predecessors.

There was an increase in household wealth since 2006, right enough, but it’s been completely driven by pension wealth – household wealth held outside of pensions has actually decreased on average, and the amount of wealth concentrated among those at the top has become more concentrated, according the Institute for Fiscal Studies, who get paid the big money to know these things.

If that wasn't the actual plan of the wealthiest, who were the ones making the decisions about the response to the financial crash and the lack of housing, then it seems to have coincidentally worked out very well for them.

There's further evidence that backs up the notion that Help to Buy is really help for builders: it only applies to new-build homes.

You don't get tax payers' money to buy an old home, of which there are millions, you only get a government bung if you are buying a newly built one.

So the builders can put up any old rubbish, knowing that the government will step in and throw money at them and that people will want one because they're desperate to get on the housing ladder.

That's why houses all look the same wherever they're built – no architect would ever admit to drawing those things.

They're made on the basis of how cheap they are to construct, not how nice they might be to live in.

That is why windows are so tiny on new houses - because bricks are cheaper than glass.

And there's no room in them which is why so many storage companies have sprung up all over the place, for people to store all the stuff they used to put in cupboards, when houses were built with such things.

The other type of homes these companies build are, of course, charmless towers of tiny executive flatlets to sell to people in Malaysia who aren't going to live in them and to the international criminal super rich who want a safe way to launder all the money they nicked.

The result in both cases is that the nation is blighted by eyesores at ground level and scraping the sky and is also why there's a chronic lack of cash in your bank account come the end of the month. 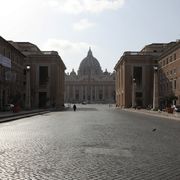